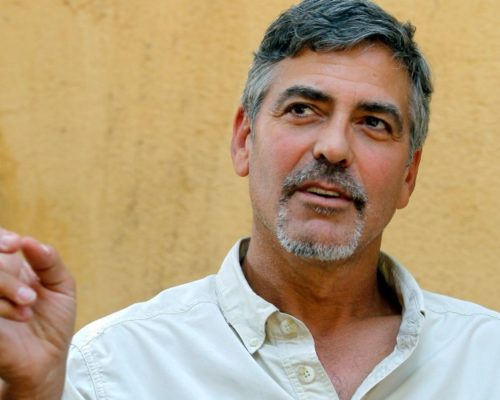 The remaining newsstands across the nation are still dotted with magazines featuring photos of George Clooney’s Venetian wedding to British barrister Amal Alamuddin.

This controlled embrace of the paparazzi on Clooney’s wedding day was motivated by charity rather than the typical celebrity cash grab. All proceeds are going to Clooney’s newest attempt to combat mass atrocities in Africa—a spin-off of his ambitious and effective Satellite Sentinel initiative, which will be directed at following the money that funds massacres.

Tucked away in some remote corner of the newsstand you might find a decidedly different Clooney cover story—a print issue of Newsweek with an article titled “George Clooney, South Sudan and How the World’s Newest Nation Imploded.”

The story is an extract from an e-book by Alex Perry which details the humanitarian roots of South Sudan’s independence and subsequent bloody struggles, weaving it into a tale of well-intentioned but ultimately doomed western interventions across the decades. Clooney is the celluloid straw man—an out-sized outsider whose determination to “do something” ended up propelling the birth of a nation that was not ready for freedom.

The contrast between the magazine covers presents its own noxious irony right up front: while Clooney is consciously leveraging his celebrity to get people to care about something bigger than celebrity, the Newsweek critique is leveraging Clooney’s celebrity to simply sell magazines. After all, a cover story about South Sudan wouldn’t exactly fly off the shelves—but frame it as some sort of celebrity scandal and maybe people will buy the thing. We all get the joke. But I’m not laughing at this one.

Cynicism often gets dressed up as world-weary wisdom. But it’s an essentially lazy pose, pretending to be clever while absolving the bearer of actually trying to solve problems. And trying to pin South Sudan’s problems on George Clooney absurdly misses the point while also rewriting recent history. Most of all, it disrespects the 98% of South Sudanese who voted for independence in 2011 after decades of a bloody civil war which killed 2.5 million people—more than any conflict since the Second World War.

On the night of January 9th, 2011, Juba was the most joyful place on earth. By the banks of the Nile, I was covering the independence referendum for an earlier incarnation of Newsweek, travelling with Clooney and Enough Project Founder John Prendergast. And while Clooney was the hook for Western readers, the story was really about celebration—the delivery of democracy by the ballot box rather than the bullet.

Despite the massive margin of victory, there was nothing inevitable about the outcome. While international outrage at the ethnic cleansing in Darfur in 2004 raised awareness about the suffering of the Sudanese people under the thuggish theocratic regime of Omar al-Bashir, a peace deal brokered by the Bush administration offered the chance for a peaceful referendum on separation between the largely Arab and Muslim north of the nation (where Osama bin Laden hid out for much of the 1990s) and the African and largely Animist and Christian south. But as the referendum day fast approached, no actionable plans were being made for it to proceed and so a renewed civil war loomed.

The international community seemed paralyzed. Bashir was betting on a combination of amnesia and apathy. Secretary of State Hillary Clinton warned that Sudan was a “ticking time bomb,” while the CIA assessed that “mass killing or genocide is most likely to occur in Southern Sudan.” Getting people to pay attention to a possible new round of slaughter in the region proved difficult. Here’s where Clooney decision to leverage his celebrity had a definite impact. As I wrote in Newsweek at the time:

“After Clooney launched a media blitz to mark 100 days to the referendum, English-language newspaper, magazine, and website mentions of the Sudan referendum spiked from six to 165 in one month. Between October and January, the referendum was mentioned in 96 stories across the networks and cable news—with Clooney used as a hook one third of the time. In that same period, 95,000 people sent emails to the White House demanding action on South Sudan. Valentino Achak Deng, the former ‘lost boy’ known to Americans as the subject of a bestselling ‘fictionalized memoir’ by Dave Eggers, What Is the What, says simply: “The referendum would not have taken place without his involvement. Never. He saved millions of lives.”

The point is not that Clooney deserves all the praise (or blame) for South Sudan’s independence. But there’s no question that he elevated the issue to such an extent that ignoring the previously agreed upon referendum became impossible. Clooney used his media influence to serve as an early warning system, helping people remember their promise to “never forget” slaughters like Rwanda. Warnings from the Secretary of State and the UN Secretary General couldn’t make people give a damn. Clooney could and did.

But Perry’s Newsweek critique of Clooney is fixated on questions about whether Clooney suffers from some kind of epidemic western Messiah complex: “Clooney was not asking himself, as I was trying to, what any of this—Sudan—had to do with him,” Perry writes. “Rather, he was acknowledging that in practice it had a lot to do with him—from the moment he decided it would. He had the clarity of moral obligation. Because he could, he should.”

Got that? Just because Clooney could help stop a slaughter and give rise to a referendum doesn’t mean that he should have done it. Perry implies that the better path might have been some kind of benign neglect by the international community, quite possibly while Sudan and its southern citizens waged a new civil war. It would all work itself out in time.
“How, really, could you foster someone else’s independence?” Perry muses. “Surely, the whole point of independence was that people had to do it for themselves.” In this, Perry might want to consult a quick history of French aid in the American Revolution or reflect on the international role in undermining apartheid in his own native land. The world didn’t begin with the Iraq War.

But Clooney is really just a framing device for the story’s larger target—Western humanitarian interventionists, who Perry traces to a PR guru during the Biafran civil war in the late-60s that birthed that well-known league of bad actors, Doctors Without Borders. Perry then hop-scotches to Charlie Wilson’s War-era Afghanistan, Boomtown Rat Bob Geldof’s Live Aid relief concerts in the face of Ethiopian famine and 1999 Kosovo where, Perry blithely explains, “NATO bombed the Serbs out of humanitarian concern.” Here he’s able to tie in Obama’s UN Ambassador Samantha Power’s previous incarnation as a journalist and author of “A Problem from Hell” to condemn the resurgence of liberal interventionism and the adoption of the UN’s “Responsibility to Protect,” known as R2P.

In a few neat sentences, Perry turns the idea of moral obligation into moral relativism. And that’s what really ought to make your stomach turn. Humanitarianism becomes Imperialism. Ethnic cleansing becomes a geo-political lifestyle choice. And condemnation of such slaughters outside sovereign borders becomes thinly-veiled racism, a reflection of deep-seeded Islamophobia.

Perry is on more stable ground when he details the impotence of UN bureaucrats in South Sudan as they go about life in their bunkered bubbles, disconnected from the people they are supposed to protect. He catalogues the sloppy flow of outside money and its failures to transform the country. And he tallies the tribal power plays and party purges by South Sudan’s president Salva Kiir, which have led to bloody battles and unjust imprisonment that threaten to tear the world’s youngest nation apart. His descriptive reporting can be compelling. Perry enjoys raising questions but he’s reluctant to offer anything resembling answers. It is the luxury of the professional observer.

Yes, there are unintended consequences to every action. But that doesn’t mean we shouldn’t take action, especially when genocide threatens to rear its ugly head. And the piece’s ultimate criticisms of Clooney—that he empowered a would-be dictator and abandoned the country after midwifing its birth don’t pan out when confronted with research or facts.

Clooney’s commitment to South Sudan has continued. His SatSentinel, a privately funded, publically accessible satellite executed through the Enough Project, DigitalGlobe, and the Harvard Humanitarian Initiative has documented real-time troop build-ups along contested borders between the north and south and provided indelible evidence of slaughters and razed villages. He’s leveraged his commercial status as a spokesman for Nescafe in Europe to convince the company to invest significantly in the production of coffee in South Sudan, which was a major cash crop there before the civil war. Coffee is now the second largest export from South Sudan, after oil. And his newest project, which the sale of his wedding photos will help fund, promises to track the assets that have been stolen from the South Sudan treasury to fuel the fighting. By any measure, this sustained support is evidence that one person can make a difference, not out of short-term self-interest but a long-term belief that winning the peace is every bit as essential as winning a war. If someone wants to dismiss this as do-goodism, fine, but it has real world effects.

Moreover, Clooney and other pro-referendum activists were always careful to caution that South Sudan’s early years might well be chaotic, but the chance of a peaceful separation was far preferable to a new civil war. And while Clooney observed the referendum, he declined invitations to attend the independence ceremony seven months later and the inauguration of President Salva Kiir. His top Africa policy pal, John Prendergast of the Enough Project, recounts Clooney explaining his concerns along the lines I heard as well: “We don’t know how this new government in Juba is going to be. Remember how the U.S. liked Robert Mugabe and Charles Taylor in the early going? Supporting the South Sudanese people is one thing, but supporting the government is another. Our work is to promote human rights and peace, not support one group or another.”

“The South Sudanese won their independence from one of the most brutal and intolerant regimes on the planet,” Prendergast continues. “98 percent of Southerners voted for independence, not because Hollywood came to visit or called on them to do so, but because it was what they had fought long and hard for. Perry and others seem to completely diminish the agency of South Sudanese in their own history. The South Sudanese earned their freedom. It wasn’t given to them.”

It’s no surprise that South Sudan’s transition to independence has been rocky—utopians need not apply. And to some extent, Newsweek’s Slate-pitch Clooney critique is a sign of the times: amid our exhaustion with foreign intervention, it’s tempting to believe that engaging with the wider world is a sucker’s bet fraught with deathly ironic unintended consequences. But in a celebrity-obsessed culture filled with Kardashians, George Clooney decided to use some of his time, money and influence on a sustained basis to set an example of soft power that could actually help some people half a world away. He dared us to care. In the process, he helped amplify the voices of people like a young man named Gaddaffi in Juba that January day, who bounded up after voting and declared, “He told the international community to wake up, that we didn’t have to be Rwanda.”

Amid grim alternatives, Clooney helped remind us all that one man still can make a difference. And that’s why he remains the rare celebrity worth celebrating.