Scaife v. Clinton and the Dangers of Demonization – The Daily Beast 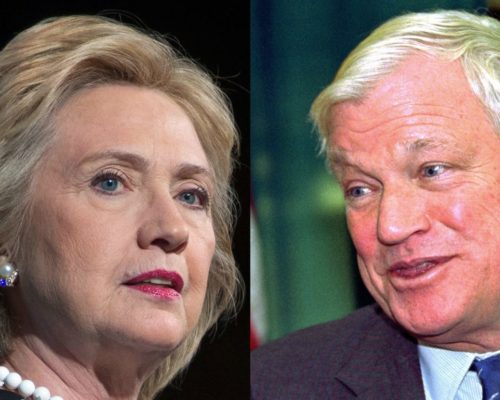 Richard Mellon Scaife—paymaster of the ‘vast right-wing conspiracy’—died July 4. But he died counting Clinton a friend who had ‘served the American people most ably.’

On July 4th, Richard Mellon Scaife died. The Pittsburgh publishing magnate was considered a conservative hero and scourge of liberals, largely because of his role funding the infamous “Arkansas Project” that pumped up anti-Clinton anxieties and ultimately led to the president’s impeachment.

When Hillary Clinton spoke of “the vast right-wing conspiracy” targeting her family in the 1990s, in large part she was referring to the cottage industry of Clinton haters briefly bankrolled by Mr. Scaife.

But something surprising and heartening happened in recent years that puts that hyper-partisan hunting season in perspective: Scaife and the Clintons found an unexpected mutual respect. It’s a cautionary tale about the dangers of demonizing those we disagree with in the Obama era. Because caricatures break down when you see over-heated political passions with a sense of perspective.

For a comprehensive look back at the Clinton haters, pick up a copy of Joe Conason and Gene Lyon’s The Hunting of The President. But suffice to say that Scaife was central in funding reporter Christopher Ruddy (now the publisher of Newsmax) to investigate conspiracy theories about the suicide of White House aide Vincent Foster and other assorted scandals.

Scaife also funneled money into “The Arkansas Project” within the American Spectator, the series of investigations which broke the news of Clinton’s Little Rock dalliances, which became known as Troopergate (in an article written by David Brock, who would later found the liberal watchdog group Media Matters for America) and printed the first mention of Paula Jones. Scaife likewise funded the conservative nonprofit Western Journalism Center, founded by Joseph Farah (now best known as the publisher of the wingnut WorldNetDaily website. His dollars seeded the field of partisan media as we know it today.

Which is why it was notable that Joe Conason tweeted Christopher Ruddy’s statement on the death of his friend and one-time benefactor, with a note to “read to the end…” Ruddy’s comments served as a coda to that particular old era of political bloodlust.

“Some years ago I introduced Dick to former President Bill Clinton,” Ruddy wrote. “Despite their previous political differences, Dick developed a friendship with President Clinton. He believed Bill Clinton had served the America people most ably as president and he held the former president in the highest esteem.”

Say what? Instead of seeing Bubba as a man systematically trying to undermine the republic, Scaife died considering Clinton a friend who “served the American people most ably.”

This evolution didn’t happen overnight. But the story of how it happened is significant. And it opens up an alternative narrative about Richard Mellon Scaife that flies in the face of conservative stereotypes and adds much needed complexity to the man’s legacy.

Pittsburgh Tribune-Review columnist Salena Zito remembers brokering a 2008 editorial board meeting between Scaife and Hillary Clinton. “I was pacing up and down in the lobby of the newsroom and thinking, ‘at the end of the day, I’m either going to be a hero or fired.’ But my gut always told me, having known Mr. Scaife as I did, that these people would have a great mutual respect for each other,” Salena remembered in a phone call with The Daily Beast. “She was supposed to be there for 45 minutes, but she did a two?hour editorial…There were no softball questions in that room and she never wavered in answering any of them. And then she took another hour tour of the newsroom and shook hands and met every single person.”

Scaife walked away impressed, according to Zito. “He said that a lot of her positions were ones that he found that he could be supportive of —and while he didn’t agree with everything that she said, he was impressed with her vast knowledge and the way she carried herself and her willingness not to shirk any question that we gave her.” Scaife penned an editorial endorsing Hillary to be the Democratic nominee and held out the possibility of a general election endorsement as well.

For Scaife-haters on the left, this was a surreal day where snowballs sailed through hell. But a more careful and consistent look at his self-penned editorial positions—and donations—painted a different picture.

A libertarian on social as well as economic issues, Scaife backed same-sex marriage equality before politicians of both parties, including the Clintons. He opposed the Iraq invasion in 2003, when even many allegedly liberal papers were failing into line behind the Bush administration, patriotically punch drunk in the wake of 9/11. Scaife also called for an end to pot prohibition and shared his fellow conservative William F. Buckley’s disdain for the drug wars. Perhaps most surprising against the backdrop of the culture wars, Scaife was one of the most prolific donors to Planned Parenthood. Another major philanthropic cause was the Clinton Global Initiative.

Yes, people are responsible for what they do and say—and fund—during their moments of maximum influence. But stereotypes have a funny way of fading when subjected to closer inspection and personal connection. People are rarely angels or devils. They are complex, multi-faceted creatures, who are generally trying to do the best they can with what they have, where they are.

It’s tempting to wonder what new freedoms the partisans Scaife funded in the 1990s would have felt if they understood their benefactors full spectrum of opinions—perhaps we could have seen an early thaw in the culture wars or a more consistent, full-throated libertarian alternative to social conservative orthodoxy. It also calls into question Democrats’ demonization of conservative donors like the Koch brothers today, whose full range of philanthropy and libertarian politics also fail to stick to conservative stereotypes.

But the biggest takeway is the giant waste of time and emotion all the over-heated hatred in our politics was at the time.

We can hear echoes of the Clinton-hating cottage industry in the unhinged hatred of President Obama that provides a business model for the far-right partisan press. You know the riffs: treating the president as fundamentally illegitimate—a simultaneously incompetent and malevolent usurper determined to degrade America’s place in the world, undermining our values as well as our Constitution. The purveyors of this hyper-partisan hate might feel patriotic but their words will look no less foolish in the rear-view mirror of history.

So let’s look at the Clinton-Scaife saga and at least try to employ some pre-emptive wisdom in our own time. Good people can disagree about politics and policy. But to an amazing extent, if they took the time to talk and understand each other they would find that—as Thomas Jefferson once said—“Every difference of opinion is not a difference of principle.”


This entry was posted in Featured Columns and tagged The Daily Beast, Wingnuts. Bookmark the permalink.