The Oscar for Best Supporting Actor Should Go to Mike Pence 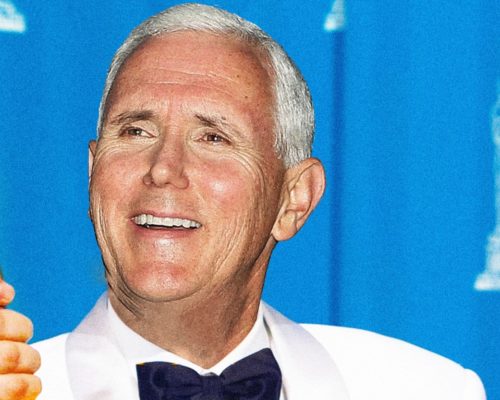 It’s Academy Awards night in America, the Super Bowl of the Hollywood elite and millions of movie goers everywhere. But scan the list of Oscar nominees, and you’ll notice one name notably missing from the Best Supporting Actors’ list: Mike Pence.

This is a criminal oversight. There is no greater working actor today than the vice president.

His steely yet adoring gaze at President Trump, clenched jaw punctuated by affirming nods, is a highly disciplined work of art. The man is a consummate method actor, inhabiting his role for 20 months since his nomination in July of 2016 without ever breaking character in public. His monologues are studies in insincerity on the world stage, overcoming his personal belief in faith and family to project pride standing next to a man who embodies almost everything he disdains in private life.

A full catalogue of his work would be impossible, but Pence set the tone early into the administration, by declaring “This is the greatest privilege of my life, to serve as Vice-President to a President who’s keeping his word to the American people.” Despite serving a president who by The Washington Post’s calculation made more than 2,000 false or misleading statements over his first year in office alone, Pence routinely calls the president “a man of his word” without a hint of irony.

When Trump fired FBI Director Comey, Pence was deployed with talking points stating that the president made the decision only after reviewing the Justice Department recommendation, capping the lie with a crisp soundbite: it was “the right decision at the right time.” The next day, Trump knee-capped his faithful messenger by admitting he was going to fire Comey anyway due to the Russia investigation.

He has compared Trump to Teddy Roosevelt while keeping a straight face, listened intently while the leader of the free world bragged about his Reality TV show ratings and told evangelical leaders “This is somebody who shares our views, shares our values, shares our beliefs.”

When asked about the Stormy Daniels affair, validated by a detailed pre-NDA interview and the uncomfortable fact of a secret $130,000 payment from Trump’s lawyer, Pence muscled through by saying he was “not going to comment on the latest baseless allegations against the President.” He did it in one take.

Through it all, Pence keeps the countenance of a molting eagle, determined to project dignity despite being surrounded by disgrace.

But Pence’s greatest performance was days before Christmas of 2017, making him clearly eligible for inclusion in this year’s Oscar crop. The stage was the infamous “Dear Leader” cabinet meeting celebrating the passage of the budget-busting tax cut.

With the vice president’s audience of one staring at him across the table, arms crossed in a self-satisfied high fold, Pence soldiered on through one of the greatest performances of political sycophancy in recorded history, praising the president, once every 12 seconds for three minutes straight.

It was a litany of obsequious one-liners, blissfully unencumbered by fact-checks: “You’ve restored American credibility on the world stage”; “You’ve spurred an optimism in this country that’s setting records”; “You’ve actually got the Congress to do, as you said, what they couldn’t do for 40 years”; and on and on.

I can already hear skeptics scoffing they could pull off a similar feat, like a third grader dismissing the artistry of Jackson Pollock, but try it yourself with a loved one. You’ll run out of unadulterated praise in about 90 seconds as you feel the sincerity drain from your face. But nevertheless, Pence persisted for another 90 seconds more, with a phalanx of cameras watching on, looking directly into the unblinking eyes of the man who stands between him and his life’s ambition.

The cavernous gap between Pence’s stick-to-the-surreal-script public statements and what must be his internal monologues become more impressive when you understand that Trump’s words and deeds are the opposite of pretty much everything Mike Pence once believed.

After all, this is a man so committed to fidelity that he refuses to even dine one-on-one with a woman who is not his wife, uncritically defending the auteur of the Access Hollywood tape, who once described sex in the 1970s as his own personal Vietnam. Karen Pence’s reported comments that the president is “reprehensible” and “totally vile” are unlikely to be utterly unrepresentative of conversations inside the Pence home.

Pence’s personal evangelical faith is core to his politics, but Trump has described communion as involving “my little wine” and “my little cracker” and asked, “Why do I have to repent, why do I have to ask for forgiveness if [I’m] not making mistakes?” According to The New Yorker, Trump routinely mocks Pence’s religion in private White House meetings, including little “jokes” about the vice-president wanting to hang gays.

Pence first came to some national prominence after losing his first congressional race and writing a soul-searching op-ed called “Confessions of a Negative Campaigner,” in which he declared, “First, a campaign ought to demonstrate the basic human decency of the candidate. That means your First Amendment rights end at the tip of your opponent’s nose—even in the matter of political rhetoric.” Now he’s risen to waiting room outside the political Mount Olympics, serving as the second to a guy who violates this first rule on a daily basis, a “counter-puncher” who bullies critics and cabinet members alike. Projecting “basic human decency” doesn’t appear on the president’s political menu.

After losing his first campaign, Pence became a right-wing radio show host who marketed himself as “Rush Limbaugh on DeCaf.” He subsequently defended the freedom of the press as a congressman, sponsoring a bill to create a federal media shield law to protect journalists from revealing their sources. This was a lonely fight among Republicans in 2007, earning Pence unlikely from the Columbia Journalism Review, which called him “journalism’s best ally in the fight to protect anonymous sources.” But as VP, he’s dutifully condemned the “mainstream media” and stood by while President Trump repeatedly calls journalists the “enemy of the American people” twists the term “fake news” to describe unflattering stories and devotes a plurality of his tweets to attacking the press.

So just what is the greatest political actor of our time thinking as he listens to Trump trample on the values he once held dear? Is he biting his tongue until it bleeds while biding his time? Does he face-palm a dozen times a day inside his head when he hears the latest verbal incontinence from the president? Does he find calm by silently reciting a personal mantra comprised solely of the number 46? Does he fantasize about impeachment while occasionally mouthing Gerald Ford’s immortal words, “our long national nightmare is over”?

What’s clear to all of us watching this painful reality show play out in our republic is that President Trump can’t stand the slightest whiff of public dissent. Pence is playing a role rooted in self-interest. You can call this hypocrisy, cowardice or the triumph of ambition over principle. Pence well may believe that this is the necessary path to fulfil God’s plan to one day make him president. But surely we can all agree that this act deserves an Oscar.


This entry was posted in Featured Columns and tagged The Daily Beast. Bookmark the permalink.