What News Needs to Do Now 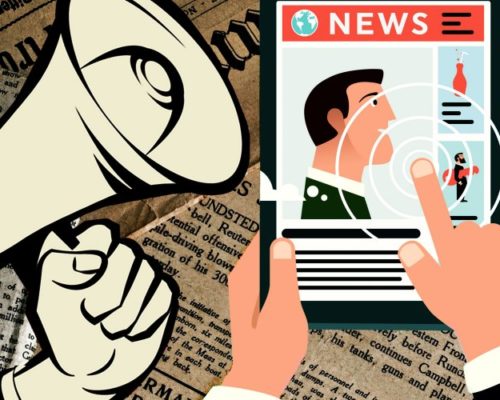 Trump has changed the rules of the game and journalists can’t expect things will return to normal after the election. That’s why news needs to do two things now more than ever: call bullshit and make important stories interesting.

When Jon Stewart bowed out last year, he closed his final “Daily Show” with a monologue that should have served as a mantra for all news media this election: “the best defense against bullshit is vigilance.”

After months of struggling with false equivalencies, news organizations are getting off the bench, belatedly realizing that this surreal election needs more than the usual amount of genteel refereeing to ensure a fact-based debate. Proudly Republican newspapers are refusing to endorse their nominee, anchors are pushing back on surrogate spin when it separates entirely from reality and lies are finally being called “lies” in headlines.

These are welcome and necessary changes—but any hope that things will return to “normal” after the election is naïve. Donald Trump has changed the rules of the game and future candidates will follow his model.

There’s been much gnashing of teeth about the media’s role in the rise of Trump. It’s been a twisted relationship from the beginning: the celebrity demagogue simultaneously craves media coverage and then attacks it for trying to hold him accountable. Some outlets bowed to his bullying demands early on because they were afraid of losing access to the candidate or were afraid of offending his supporters. Others, including The Washington Post and The Daily Beast (where I am Editor-in-Chief) were blacklisted and loudly denounced by the candidate. We consider it a badge of honor.

But we all need to confront the fact that Trump’s attacks on the media resonate among his supporters because journalism is facing a crisis of credibility in a time of transition. Trust in media has been on the decline for decades, but a new Gallup poll shows it hitting a 40-year low, driven by a stark partisan divide. Overall, only a quarter of Americans regard journalism as an honest and trustworthy profession.

These troubling trends have been fed by the rise of partisan news and click-bait content farms that either enable citizens to segregate themselves into separate political realities or devalue real news by disrespecting the audience’s intelligence. Subjective realities and metaphorical truths pushed by social media mobs deepen these divisions and make reasonable people retreat from civic debates.

Just as Trump emerged from a polarized political swamp, the trust-in-media breakdown that his rise reflects will still need to be confronted after the election, whether he’s in the White House or busy building Trump TV. Journalists have a responsibility to help rebuild the trust that once underscored Senator Daniel Patrick Moynihan’s admonition that “everyone is entitled to their own opinion, but not their own facts.”

To turn the tide, news needs to do two things now more than ever: call bullshit and make important stories interesting.

Amid sprawling spin and superficiality, the value in news today comes from edgy, original reporting pursued without fear or favor. News organizations should be non-partisan, but not neutral—hitting targets on the right and the left, as the facts dictate. We need to be happy warriors who love confronting bullies, bigots and hypocrites on either side of the aisle.

But it’s essential to avoid the swamp of “on the one hand, on the other” moral relativism that plagues some news organizations. If journalists simply repeat what they know to be a lie without publicly pushing back with a fact-check, then they become part of the problem. Especially in the arena of cable news, that means issuing “reality checks” as close to real time as possible, evident in the chyron as well as from the interrogating anchor.

Trump is a master marketer, a hype man whose political success is built on deflection from real issues in favor of spectacular insults. He’s targeted media’s Achilles heel: a bias toward covering conflict. As we all learned during the primaries, a leading candidate making outrageous claims and demonizing whole demographics gets much more airtime than candidates trying to talk responsibly about policies they would implement as president. In turn, civic discourse gets defined down. And so here, too, media has a responsibility to push back with a compelling alternative that’s always skeptical but never cynical.

A journalist’s basic job is to make important stories interesting. We have a responsibility to keep civic debates focused on what actually matters. But there’s no shame in recognizing that we need to entertain while we educate. Real news doesn’t need to taste like medicine.

Unfortunately, the refrain too often heard is that stories ranging from Afghanistan to Iraq to Syria “don’t rate.” This is usually said with an apologetic shrug, suggesting the impotence of the otherwise uber-empowered news producer. That approach isn’t only insulting to the people fighting and dying, it is insulting to the intelligence of viewers, who have a thousand different ways to spend their time and have chosen to view the news. They can get stupid virtually any place else.

All the data now at our disposal can make news organizations smarter, faster and more responsive to readers interests. But slavishly following trending topics and algorithms can propel news toward an undifferentiated mass of click-bait, the 21st century version of bread and circuses.

While I’m proud that The Daily Beast now reaches more than 1 million readers a day, how a site grows is as important as that it grows. Influence is more valuable than scale for its own sake. A site can boost traffic in the short run by chasing the lowest common denominator, but in the long run this will kill what makes it unique. In a digital age when information is everywhere, content farm commodity news is the killer of differentiation. And differentiation is the soul of a news brand.

For all the responsibility that journalists have for fixing our own problems, we’re not in this alone. Every citizen who complains about the state of news needs to remember that you vote with your eyeballs every day. If you reward the superficial with your attention, you’ll get more of it. But if you want to see more quality news then you need to read and support those sites and channels that pursue it. It’s an extension of the idea that we all need to be the change we want to see in the world.

As we face an election with outsized consequences, it’s worth remembering that the U.S. Constitution doesn’t mention political parties, but it does mention journalists. The founders understood that a free press and an educated public are essential to self-governance. Which is why quality news isn’t just nice to have for democracy. It’s necessary.