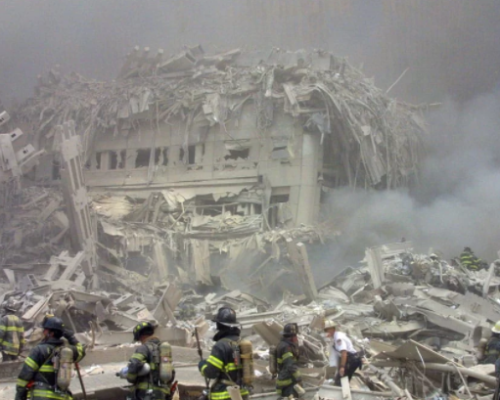 As we approach tomorrow’s eighth anniversary of the September 11th attacks—the first since President George W. Bush left office—there’s been a creeping complacency to the remembrance, a feeling of obligation bordering on inconvenience. It’s as if America wants to turn the page, but can’t quite bring itself to ignore the hole that’s still at ground zero or the war that’s still going on against the Taliban in Afghanistan.

I understand, of course, the natural fading of memory. Time marches on. But 9/11 has defined our stubbornly nameless decade, along with the bookend election of Barack Obama. And the roots of the tragedy remain firmly in place. Eight years after Pearl Harbor, the closest historic parallel, World War II was four years over. We are still engaged in this wider war against Islamist terrorism and the original war—the “good war”—in Afghanistan. Osama bin Laden is still un-captured. The Taliban is resurgent. Al Qaeda is on the run but not yet destroyed. They still want to kill us.

The Freedom Tower has been downsized and renamed “One World Trade Center” so as not to offend prospective Chinese tenants who get nervous around the word ‘freedom’.

So who is to blame for this? The largest portion of blame belongs to the group that made 9/11 their legacy: the Bush Administration. They politicized what was and should have remained a day of national unity and resolve, turning it into a partisan invective and an excuse for an unrelated war. This created cynicism—and that has lead to 9/11 amnesia.

Public support for the war in Afghanistan is plummeting, even as the Obama administration refocuses its efforts there against the growing protest of liberals and neo-isolationists calling for withdrawal. A CNN/Opinion Research Poll found that 57 percent of Americans now say they oppose U.S. involvement in Afghanistan, with 42 percent supporting. Seventy percent of Republicans support the war, and by the transitive property, Obama’s policy—but independents’ support has fallen 10 percent since April, moving toward Democrats’ 75 percent opposition. This is a troubling trend with geopolitical implications, as any reader or viewer of Charlie Wilson’s War ought to appreciate. Power vacuums in that keystone state breed more violence. History’s interconnection doesn’t stop with our attention span.

There’s also been a conspicuous retreat from the language of 9/11. The phrase “war on terror” has been abandoned by the Obama administration, presumably for sounding too Rumsfeldian. In its place is the far less sonorous “Overseas Contingency Operation”—a label designed to be forgotten.

The Freedom Tower—once conceived to be the cornerstone of the redeveloped ground zero, standing tall at a symbolic 1,776 feet—has been downsized and renamed “One World Trade Center” so as not to offend prospective Chinese tenants who get nervous around the word ‘freedom’. The outcry has not been loud enough to change the developers’ mind.

The final insult is, for me, the most frustrating – the persistent paranoia of 9/11 “truther” conspiracy theorists threatens to exceed the sober resolve of the average American citizen when it comes to keeping the memory of 9/11 alive and actionable. Ex-green-jobs czar Van Jones’ willingness to sign their petition—and David Axelrod’s failure to clearly condemn it on-air during an interview on Meet the Press—is a sign of these muddying waters.

Paradoxically, Bush also enabled 9/11 amnesia through his success. We have been able to begin to forget because we have not been attacked since September 11, 2001. There have been at least 14 attempted terrorist attacks successfully stopped by authorities in the U.S. or abroad since 9/11, including the plot to bring down airliners over the Atlantic, which just drew three convictions in a U.K. court. The subsequent train attacks in London and Madrid feel distant, comparative footnotes that have caused us to drift toward the dangerous idea that terrorism is more like crime than a war, something to be contained rather than confronted. This aspect of our amnesia will vanish when we are attacked again—because no society bats 1.000 against evil—and those who minimize the threats now will look even more foolish than those who fear-mongered and doom-sayed their way through sunny days.

“Never Forget” is easy to say and hard to maintain. The question of how to combat 9/11 amnesia while moving forward can feel like a Zen koan. For witnesses of the attack, those covered with soot, we already feel like veterans of a conflict. We carry the scars with us below the surface. And there will come a time when the observant among us may look like old soldiers muttering over war memorials—but this past is not past. The war is not yet won.

On Tuesday night, the twin towers of light appeared over Lower Manhattan for their annual vigil through the 11th. Staring up at them from my rooftop a few blocks from ground zero, I saw flocks of birds circling in the beams’ light, riding them up into the night sky. They echoed the sheets of paper forced out of the towers’ windows that swirled and hung in the void eight years ago.

The persistence of memory is quietly defiant, a liberating sign. But it is not a substitute for action while action still matters. Giving up on Afghanistan—or being lulled into a false sense of security here at home—is a sin of short-sightedness fueled by cynicism and civic laziness. Vigilance is that “increased devotion” that Lincoln spoke of, to “resolve that these dead shall not have died in vain.”


This entry was posted in Columns and tagged 2008 Elections, 9/11, The Daily Beast, The Resilient City. Bookmark the permalink.