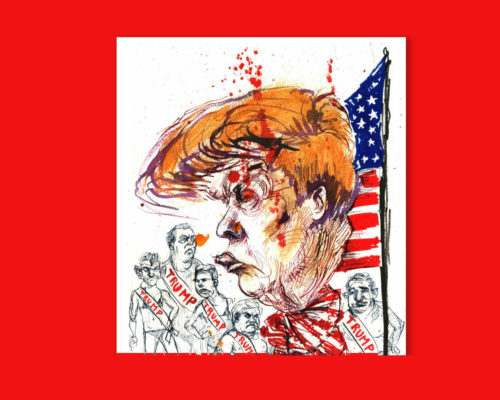 The Daily Beast editor-in-chief reports from Cleveland, where Donald Trump’s coronation feels more like a funeral. As one seasoned operative said: “I’ve got to go on TV and defend the indefensible.”

CLEVELAND — You have to remind yourself that none of this is normal.

The red, white and blue banners are waving here at the Republican convention, just as they should. There are the T-shirt sellers and outdoor food stalls, the busy mix of politicos and journalists. There are bands playing in the square and more than ample elephant imagery.

But there is no joy at this party. Instead of optimism there is moral exhaustion. The few Congressmen who decided to arrive have the look of spectators at a hanging. A surprising number of delegates quietly confide that they won’t be voting for the nominee. Seasoned party operatives are anxious and apologetic, with one ruefully smiling before saying “I’ve got to go on TV and defend the indefensible.”

Beneath all the American flag bunting, the details seem fit for a dystopian novel. Inside the empty baseball stadium that adjoins the convention hall, there are shop owners hawking patriotic wares: signed framed photos of Ronald Reagan; Dwight D. Eisenhower; both Presidents Bush and now Donald J. Trump.

Traditionally, we’ve had governors, senators and generals ascend to the presidency, offering unifying messages to create broad coalitions. Now we have a reality TV star, a billionaire populist who now calls himself a “Fifth Avenue Redneck.”

He’s famously quick with insults and loose with facts, campaigning on the animating idea of “America First,” a slogan last trotted out by fascist-friendly isolationists sucking up to Hitler. The primary policies underlying this latest incarnation are a Muslim ban, building a “big beautiful wall” across our southern border and aiding Valdimir Putin’s expansionist aims by gutting NATO.

The Party of Lincoln’s convention has been reduced to an extended advertisement for the Trump Family brand and their odd entourage of D?list celebrities, children and assorted sycophants acting as character witnesses for the candidate, while responsible Republicans do everything they can to flee the Cleve.

The home state governor, John Kasich, has declined to appear here, a diss the tourism board must have hated. Former Speaker of the House John Boehner is hanging out at an old school Italian joint, smoking Camels on the corner but declining to walk a few blocks to greet his party. Down in Texas, George W. Bush is musing aloud that he could be the last Republican president.

And that’s the unspoken anxiety behind this scheduled celebration: These could be the last days of the Grand Old Party. Trump fans seem primarily united by their grievances. The party’s racial homogeneity, always bad, is now much worse—with African Americans’ support down to zero percent in multiple polls.

And the illusion of being a party built on policies and principles, rather than cultural and economic resentments, seems lost to the latest generation of Know-Nothings. Free trade has been all but abandoned but the anti-gay platform has been enhanced.

Hating Hillary, a time-honored pastime in conservative circles, has become the glue that holds this motley crew together. But even that partisan emotional outlet has crossed the line from typical team-ism to something darker and more surreal. A recurring theme in the convention hall is the chant to “Lock Her Up” while wearing T-shirts that say “Hillary for Prison.”

There are countries where political opponents are threatened with imprisonment. America hasn’t traditionally been one of them.
But this time it feels different. America is on the knife-edge of something dangerous. We’ve had our share of demagogues before—Huey Long and George Wallace come to mind—but never has one won the nomination of a major political party. You’ve got to reach to dark fiction to find the closest parallels: Sinclair Lewis’ It Can’t Happen Here; Philip Roth’s The Plot Against America; or Tim Robbins’ 1990s film Bob Roberts.

The Republican Party deserves plenty of blame for bringing this on themselves by purging the ranks of the center-right while empowering conservative populists through hyper-partisan media. And it’s a novelistic twist to see Roger Ailes, the man who created hyper-partisan media and its attendant “positive polarization,” collapse at the very moment his ultimate expression clinches the nomination.

But in a larger sense, Trump’s rise reflects America’s cash and celebrity-obsessed reality-TV culture. It’s just the right shiny new wrapping for the oldest Achilles’ heel of democracy: the strongman who promises to solve all problems without details while demonizing the opposition. Some people just love a whiff of authoritarianism in their leaders.

This, ironically, is the opposite of American exceptionalism from a party that has proudly declared its belief in the concept. Because every country that’s ever lived with a tin-pot dictator in a Banana Republic or high-toned Berlusconi version will laugh knowingly at our predicament and pretensions. History always gets the last word. And that’s the lens through which we’ve got to try to see the rest of this convention and campaign.

Politics is history in the present tense but perspective is the thing we have least of in the day-to-day rough and tumble of coverage. We’ve all become accustomed to a steady stream of insults, lies and innuendos, so much so that the nominee’s suggestion that the President of the United States is secretly supporting terrorists barely rises to the level of news.

Over the course of covering this campaign, we’ve become numb, our moral clarity compromised by constant assault. But as George Orwell once warned, “to see what is in front of one’s nose needs a constant struggle.” We’ve got to think about how this campaign will look when our children and grandchildren read about it in history books—and write the first draft accordingly.