The Ballad of Lester Maddox 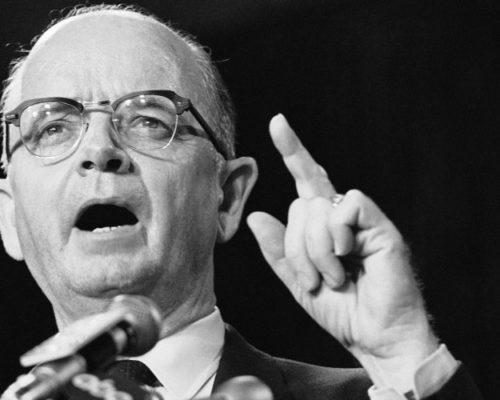 As we’ve been reminded by the fight in Indiana, supporters of discrimination have always cloaked their views in appeals to personal liberty.

Once upon a time, a restaurant owner refused to serve people who were different. He said he did so in the name of freedom, not discrimination.

The time was 1964, the place was Georgia, and the man was Lester Maddox. He was the owner of The Pickrick restaurant and one July day he chased out three black patrons, waving a pistol. This made him something of a local celebrity and a national symbol of resistance to the big government imposition of civil rights. But he always insisted that he was not motivated by racism but simply defending the rights of private property and his personal beliefs.

“This property belongs to me—and I’ll throw out a white one, a black one, a red-headed one or a bald headed one. It doesn’t make any difference to me.”

Maddox became a hero to conservative populists—most of whom were Democrats at that time in the South, because of a hangover from the Civil War a century before—and he rode the wave of resistance to desegregation all the way to the Governor’s mansion two years later.

“History doesn’t repeat, but sometimes it rhymes,” Mark Twain allegedly said. And there are no perfect parallels between Lester Maddox and the florists, bakers, and other small-business owners who have been invoked as a reason to protect the religious liberties of those who could legally refuse to serve gay and lesbian weddings. But amid a national debate about gay civil rights a half-century later, as we fitfully evolve toward the promise of a more perfect union, it is useful to listen for echoes of old arguments because they can clarify our current conversations.

We’ve had an age-old argument in our nation between the powers of the federal government and states’ rights. It goes back to the ratification of the Constitution (ironic, because many of the states’ rights advocates since have presented themselves as the purest defenders of the Constitution) and found expression in the heated debates between John C. Calhoun and Daniel Webster, and Jefferson Davis and Abraham Lincoln, that ultimately exploded into civil war. The arguments resurfaced again in the 1960s over civil rights and desegregation. And so it goes.

But the de facto defenders of slavery and segregation rarely framed their arguments as endorsements of inequality. Instead, their argument was often uplifted, framed as a defense of lofty ideals. Sometimes these were rooted in theological objections—defense of slavery and defense of segregation was at one point imbued with the hue of religious belief. But more often it was framed as a fight between individual liberty and government tyranny, with no irony intended.

George Wallace, the conservative populist Democratic governor of Alabama who heatedly defended segregation, was a case in point. He famously thundered in his inaugural address that “It is very appropriate that from this cradle of the Confederacy, this very heart of the great Anglo-Saxon Southland, that today we sound the drum for freedom as have our generations of forebears before us time and again down through history… In the name of the greatest people that have ever trod this earth, I draw the line in the dust and toss the gauntlet before the feet of tyranny, and I say segregation now, segregation tomorrow, segregation forever.”

But he also made more subtle arguments against civil rights, rooted in private property: “This civil rights bill will wind up putting a homeowner in jail because he doesn’t sell his home to someone that some bureaucrat thinks he ought to sell it to.”

And yet he insisted, “I never made a statement in my political life that reflects on a man’s race… my only interest is in the restoration of local government.”

Apple CEO Tim Cook grew up in George Wallace’s Alabama and as he wrote this week in The Washington Post, “I remember what it was like to grow up in the South in the 1960s and 1970s. Discrimination isn’t something that’s easy to oppose. It doesn’t always stare you in the face. It moves in the shadows. And sometimes it shrouds itself within the very laws meant to protect us.”

It’s this “shroud” line that’s most relevant here. Even old Lester Maddox, looking back on his life in a 1975 memoir, reflected that “I knew then, as I know now, that I was trying to protect not only the rights of Lester Maddox, but every citizen, including the three men I chased off the property.”

This seductive self-justification doubles as self-deception. It’s a trope that tied libertarians up in knots for decades, trying to mediate their own twin imperatives of property rights and individual liberty. But time has made those choices clearer, as conservatives celebrate the now self-evident moral clarity of Martin Luther King, who declared that he was “embarrassed” when Maddox was elected governor. This was understandable, given that Maddox called desegregation “ungodly, un-Christian and un-American.”

Maddox, if he is remembered today, is perhaps best known as a refrain in the ’70s-era satirical Randy Newman song “Rednecks,” which proclaims, “Well, he may be a fool, but he’s our fool, and if you think that you’re better than him you’re wrong.” The song goes on to jab at the hypocrisy of self-righteous Northern critics who denounce the South while ignoring the segregation that hides under their own noses in cities like New York, Chicago, and Boston. But as with all satire, the song contains a serious point that echoes on today: When conservative populism rears its head, liberals often make divisions worse by denying the respective humanity and individuality of the people with whom they disagree, compounding resentments that can turn into political backlash that endures for decades.

What’s sinister is the Orwellian mislabeling of the impulses behind resistance to civil rights progress that aims to ensure equal protection as a defense of liberty. And while it’s become fashionable for conservatives to honor Martin Luther King and venerate past civil rights fights, it’s nothing more than an attempt to benefit from historical amnesia unless they are willing to apply those lessons to present-day debates. That means respecting the core conservative value of individual freedom in reality rather than just rhetoric.

In the Ballad of Lester Maddox, the lyrics change but the melody remains the same. It echoes across the decades, age-old arguments where freedom to discriminate becomes the emotional litmus-test of liberty. Direct parallels may miss the point, but ignoring these echoes blinds us from the ability to see current events in light of history and to anticipate what arguments will look like generations from now.