The Mount Rushmore Fight Club: A History of Hating Presidents, from Washington to Obama 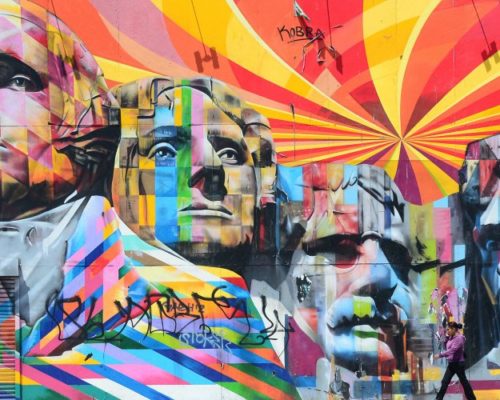 Perspective is the thing we have least of in our politics. And as the USA celebrates Presidents’ Day, it is tempting to lament the lack of respect given to the Oval Office these days—especially its current occupant.

Politics ain’t beanbag, but Barack Obama has been subjected what certainly seems like an unusual amount of paranoid projection from high places during his five years in office. In addition to the daily drumbeat from right wing talk radio and cable television, by the end of the 2012 election, no less than 89 books had been published with little purpose other that to propagate a monstrous image of the president. Among their titles were The Great Destroyer: Barack Obama’s War on the Republic; Trickle Down Tyranny; To Save America: Stopping Obama’s Secular Socialist Machine; and The Blueprint: Obama’s Plan to Subvert the Constitution and Build an Imperial Presidency. The themes are often carried forward by conservative members of congress trying to play to the base. During the State of the Union in January Texas representative Randy Weber tweeted that the president was a “socialist dictator,” while Senator Ted Cruz summed up his Wall Street Journal op-ed with this tweet: “In the nation’s history, there is simply no precedent for an American president so wantonly ignoring federal law.”

There is, however, plenty of precedent for presidents being accused of tyranny, dictatorship and a determination to trample on the Constitution.

Let’s start with a quick survey of the quartet of presidential greats enshrined in Mount Rushmore.

The original Founding Father, George Washington, is remembered as enduring example of character and virtue—and so we often assume that he was similarly respected by contemporary countrymen. But when our first president presided over the shaky young republic, newspapers like the Aurora (edited by Benjamin Franklin’s grandson) obsessively attacked him, calling on Washington to abruptly resign the office while declaring that “that the mask of political hypocrisy has been alike worn by Caesar, a Cromwell and a Washington.” Washington’s one-time ally Thomas Paine turned on him in vicious fashion after the Jay Treaty with Great Britain, writing, “the world will be puzzled to decide whether you are an apostate or an imposter; whether you have abandoned good principles or whether you ever had any.” Pamphlets published by early partisan opponents like William Duane denounced Washington’s “tyrannical act,” ‘Machiavellian policy,’ and “monarchical privilege.” The former general of the Continental Army was unused to being attacked in the press with such impunity, and he proved to be surprisingly thin-skinned, complaining in one last letter to Thomas Jefferson that he was being slandered “in such an exaggerated, and indecent terms as scarcely be applied to a Nero; a notorious defaulter; or even to a common pickpocket.”

One space over on Mount Rushmore, Thomas Jefferson attacked political opponents through the partisan press and was attacked in return with accusations of being an “infidel” and a “howling atheist.” The Federalist Gazette of the United States framed the election this way: “the only question to be asked by every American, laying his hand on his heart, is ‘shall I continue in allegiance to God—and a religious president; or impiously declare for Jefferson—and no God!” After Jefferson’s election, opponents tried to undo the election by pushing for impeachment, arguing, “that self-exalted tyrant shall be hurled headlong from his political zenith to dwell with Jacobins and devils in the pit.”

The now-sainted Abraham Lincoln was subject to particularly vicious attacks while presiding over the Civil War. “Confederates called Lincoln a ‘tyrant,’ a ‘fiend,’ and a ‘monster,’” recounts Don E. Fehrenbacher in his essay “The Anti-Lincoln Tradition.” “In speeches, sermons, and songs, in books, magazines, newspapers, pamphlets, and broadsides, they also portrayed him as a simpleton, a buffoon, a drunkard, a libertine, a physical coward, and a pornographic story-teller.”

In a drunken speech on the Senate floor, Delaware’s Democratic senator Willard Saulsbury declared, “I never did see or converse with such a weak and imbecile a man; the weakest man I ever knew in high place. If I wanted to paint a despot, a man perfectly regardless of every constitutional right of the people, I would paint the hideous ape-like form of Abraham Lincoln.” A copperhead Wisconsin newspaper editor named Marcus M. Pomeroy wrote that Lincoln was a “but the fungus from the corrupt womb of bigotry and fanaticism” and a “worse tyrant and more inhuman butcher than has existed since the days of Nero.” With the election of 1864 looming, Pomeroy wrote, “The man who votes for Lincoln now is a traitor and murderer. … And if he is elected to misgovern for another four years, we trust some bold hand will pierce his heart with dagger point for the public good.”
Fast-forward ahead to the final member of the Mount Rushmore quartet, Teddy Roosevelt, and the accusation of subverting the Constitution was common, at pace with his unprecedented 1,081 executive orders (compared to Obama’s 168 to date). On Wall Street, the famed Trust Buster’s reputation was lower than a stock in freefall. Biographer Edmund Morris recounts how “rumors that [T.R.] was an alcoholic had strengthened into reports that he was insane.”

And so it goes. In more recent years we have seen the profitable 1990s cottage industry of hating Bill and Hillary Clinton, which summoned up a vast array of conspiracies including secret communist allegiances, drug-dealing and murder. (Get ready for a massive repackaging of these once urgent absurdities if Hillary runs for president). The Bush Derangement Syndrome of the last decade saw liberal protesters echoing the sentiments expressed by legendary, musician and activist Harry Belafonte who called the president “the greatest tyrant in the world, the greatest terrorist in the world” while standing alongside Venezuela’s Hugo Chavez.

Some folks will look at this record of unhinged insults and see the ugly beauty of democracy—the right to criticize public figures regardless of remote accuracy. Freedom of the press and freedom of speech are indeed sacred things. But others will look at the historic record of hate and slander and conveniently find excuses for their own political vitriol, wrapping partisan bile up in high-minded historic parallels. The real takeaway consists of this: today’s hyper-partisan appeals to ancient anxieties will not look any better in the rearview mirror of history than the unhinged attacks on the Mount Rushmore crew.