What Macron Can Teach America: It’s Time for Center-Left and Center-Right to Unite 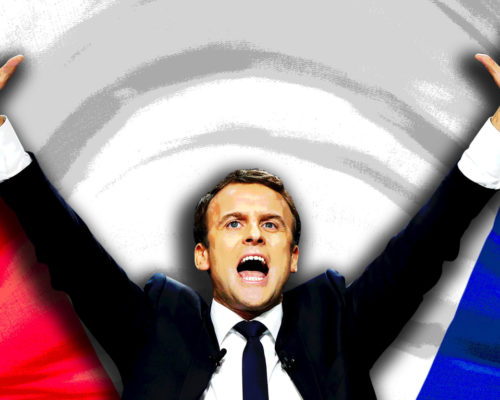 In a time of Trump and deepening populist polarization in both parties, the idea of a radical centrist revolution seems as unlikely as it does quaint.

But in 15 months, Emmanuel Macron has created a powerful counter-narrative in a time of ethno-nationalist pushback to globalization. His centrist party—La République en Marche—did not even exist when Donald Trump won his first primaries. After this past weekend’s elections, it commands a super-majority in the French parliament, displacing the Socialist Party almost entirely.

Macron tapped into populist desire for change against the stale status quo, but he channeled it in a constructive, rather than destructive, direction. A new generation of first-time candidates—including a majority women—ran for office on his party ticket. The policies they backed were not the stuff of pie-in-the-sky protest votes but a recognition that the major forces shaping our future—technology, the environment, the global economy—do not neatly cleave into ideologically driven left versus right positions.

Instead, the choice we face is between an open and closed vision of society, bridge builders versus wall-builders. This perspective offers us the opportunity to clear out some of the cobwebs from our outdated political debates and build a broader coalition between the center-left and the center-right with a few libertarians thrown in for good measure. The result is a refocus on a free-market liberalism that many American centrists would recognize as being consistent with their self-definition: fiscally conservative but socially liberal.

This balanced perspective is much more ideologically consistent than it commonly gets credit for: it is a classical liberal vision of free people and free markets that seeks to balance individual liberty with generational responsibility. It is guided by a belief in muscular moderation at home and multi-lateral internationalism abroad.

When American politics is functioning, there is broad consensus around this vision. For most of the past half-century, we’ve had vigorous debates held within the 30 yard-lines of the political field. There is an implicit recognition that “every difference of opinion is not a difference of principle,” as Jefferson once said. But what we have today is a deep departure from that American consensus.

Trump’s Republican Party represents a repudiation of the open society, no matter how its members of Congress try to contort themselves to explain the president’s positions. The uncomfortable fact is that Trump trounced his Republican rivals in the presidential primaries by discarding almost every article of Republican policy faith.

Conservative populist primary voters showed that they weren’t motivated by ideas or ideology nearly as much as attitude—a defiant dismissal of PC paeans to unity in diversity in favor of a celebrity demagogue who called out Muslims and Mexicans with reckless abandon. And so that candidate could get caught on tape bragging about grabbing a married woman’s genitals and still win 83 percent the evangelical vote. Reagan’s party of strong national security nominated a man who never lost an opportunity to praise Vladimir Putin. A nominee who described himself as “the king of debt” and campaigned on a protectionist platform was embraced by long-time free-market economists and deficit hawks who didn’t want to lose their influence on the conservative circuit. The result is a party in power without any of the credibility that comes from standing for core beliefs.

Even in this environment, neither party has a monopoly on virtue or vice. But the fact is that we do have asymmetric polarization in our country—which is a fancy way of saying that Republicans have been growing more politically extreme than Democrats for the past two decades.

Democrats have hewed much closer to the center since Bill Clinton led their party back from three consecutive presidential defeats in which they lost at least 40 states. They can take some comfort from the fact that their party is still evenly divided between self-described moderates and liberals, while Republicans have RINO-hunted their moderates nearly out of existence (while nominating a New Yorker who a decade ago backed gun control and abortion rights).

But the Bernie-Hillary divisions are deepening, not healing. There is still no clear consensus about why Hillary lost, in part because she won the popular vote by such a large margin. The white working-class voters in the upper Midwest whom Clinton lost would seem like a demographic unlikely to be won over by more left-wing identity politics, but that seems to be the prescription the party base is most excited about. Already we’re seeing some influential activists declare that Jon Ossoff lost in Georgia’s Republican-leaning 6th district because he was too centrist—which of course didn’t stop Republicans from painting him as a left-wing anarchist. Moving toward rigid identity politics and socialist economics offers a degree of novelty, but it’s the kind of gamble that could reelect Trump-Pence in a country whose overall center of political gravity remains center-right.

What’s hiding in plain site is the fact that America’s moderate majority is politically homeless in this equation. The center-left is far more influential than the center-right in their respective parties, but the reality is that both those groups share far more in common with each other than they do with their party’s populist bases.

They both share a belief in fiscal responsibility and individual liberty. They balance realism and idealism and understand the strength of an open rather than closed society. They put country over party, view principled moderation as a political virtue and deeply believe in American leadership in the world. But they do not simply seek the safe middle ground—for example, many back school choice while being pro-choice when it comes to abortion. They are reformers in a field of reactionaries and radicals.
There is an opportunity for a bold articulation of this considerable common ground. Amid all the coverage of populist anger what gets lost is how much of it was directed at the dysfunction of Washington DC, precisely because the capital has been so polarized. More polarization is not the cure, it is the problem that created the frustration. The right leader can make the case that poisonous polarization is the broken status quo and the radical center offers a decisive break with the recent past.
But one lesson Americans need to take from this civic stress test is that a president can’t be expected to come to save us. We The People are the ultimate backstop in our democracy and therefore we need a broader movement of citizens, rooted in our best history and most inclusive traditions to re-center our politics and civic debates.

We need more radical centrist senators and congresswomen from both parties who can form a coalition that holds the balance of power by voting their conscience rather than splitting the difference. And ultimately, perhaps, it may be time for those senators and select governors to split off and form something new, responding to the fact that 57 percent of Americans believe there is a need for a third party, according to a 2016 Gallup poll.

After all, the most popular governors in the country—Blue State Republicans Charlie Baker of Massachusetts and Larry Hogan of Maryland—cannot hope to run for president because their very moderation, which makes them so popular and effective, is a disqualifier in the Republican primary. When our political parties write-off the very candidates who have proven their ability to appeal across the aisle, we are living in an insane situation that doesn’t reflect well on our ability to unite and govern in the national interest. And this self-inflcited dysfunction only adds credence to those competing powers who want to make the case that liberal democracy is inefficient and ill-equipped to succed in the 21st century.

We live in a time of massive disruption born of new technology. Partisan politics is the last place people are still expected to be satisfied with a choice between Brand A and Brand B.

In the short run, the best thing for our democracy is to dislodge unified control of Washington from one party, under Trump, which has abandoned its ideals to a rank opportunism that often panders to our worst impulses without any sense of responsibility.

In the long run, the conditions might be right for the creation of a new centrist coalition that can restore our faith in representative government. They can claim a direct connection to our founding fathers’ distrust of extremism and belief in moderation as a source of political strength. This vision draws on some forgotten wisdom—that the real political divisions aren’t between left and right but between radicals, reactionaries and reformers.

It’s time for reformers to rise up and unapologetically proclaim the strength of the radical center. With storm clouds surrounding liberal democracy at home and abroad, we can hopelessly fixate on all the very real dangers, or we can look to the one bright counter-veiling trend. Macron’s radical centrist movement could prove to be the most durable inspiration from overseas since France gave America the Statue of Liberty.