GOP’s Supreme Court hypocrisy in their own words – CNN 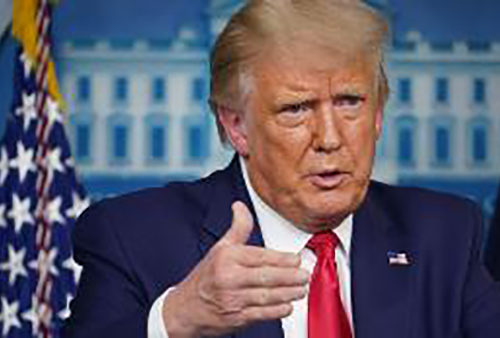 In March 2016, Sen. Lindsey Graham brushed off accusations of partisanship and invited critics to hold his feet to the fire after he opposed President Barack Obama’s Supreme Court pick to replace Justice Antonin Scalia. His reasoning? It was an election year.

“I want you to use my words against me,” the South Carolina Republican said. “If there’s a Republican president in 2016 and a vacancy occurs in the last year of the first term, you can say Lindsey Graham said, ‘Let’s let the next president, whoever it might be, make that nomination.'”

But on Saturday, less than 24 hours after Justice Ruth Bader Ginsburg’s death, Graham tweeted, “I will support President @realDonaldTrump in any effort to move forward regarding the recent vacancy created by the passing of Justice Ginsburg.”

Our nation faces a dangerous moment. The death of Ginsburg highlights just how much the popular legitimacy of our democratic institutions are at stake in this election — and how it could escalate our already bitter partisan and personal divisions.
Republicans have lost the popular vote in all but one of the last seven presidential elections. But they have appointed four of the last six picks to the Supreme Court, based on the support of GOP senators who represent less than half the American people.

Now, with less than 50 days until an election in which President Donald Trump does not seem to be trying to win the popular vote as a matter of strategy, he said he will try to push through a conservative replacement for the liberal Ginsburg, no doubt with Senate Majority Leader Mitch McConnell’s help. It’s a political gift for a beleaguered President weighed down in the polls by a seemingly endless series of self-inflicted scandals and the tragic fact of nearly 200,000 Americans dead from his administration’s disastrous response to the Covid-19 pandemic.

Before Trump, Republicans talked a lot about values and character. They talked about preserving our institutions and traditions. It’s not an argument that is operative today. Instead, situational ethics have been weaponized in Washington. And the stakes are always highest when a Supreme Court pick is involved.

Searching for a way to make the naked power grab look principled, McConnell seized on a statement made by Vice President Joe Biden back in 1992, in which Biden asserted that there should be no vote on a Supreme Court nominee in an election year.

McConnell said that stance showed that his decision was “about a principle, not a person” and tried to pass it off as a long-standing tradition (it is not).

Republican senators strained themselves trying to get in line behind their leader, echoing the argument that their blatantly partisan decision to block a vote on a Supreme Court nominee nine months before an election was indeed really about principles. And it’s worth reading their statements from back then to fully appreciate the head-spinning hypocrisy at work.

Graham — now chairman of the key Judiciary Committee and in a surprisingly tight race for re-election in South Carolina — doubled down on his 2016 comments restating his stance during an interview in 2018, saying, “If an opening comes in the last year of President Trump’s term, and the primary process has started, we’ll wait to the next election.”

Graham is far from the only senator to make solemn “principled” promises.

Florida Sen. Marco Rubio, now acting chairman of the Intelligence Committee, said in March 2016, “I don’t think we should be moving forward on a nominee in the last year of this president’s term. I would say that if it was a Republican president.”

Colorado Sen. Cory Gardner, who is trailing in his reelection race, had this to say nine months out from the 2016 election: “I think we’re too close to the election. The president who is elected in November should be the one who makes this decision.”

Here’s what Sen. Joni Ernst of Iowa, also in a tight race for reelection, said in February 2016: “We will see what the people say this fall and our next president, regardless of party, will be making that nomination.”

North Carolina Sen. Thom Tillis, also fighting for his reelection, said this in 2016: “Vice President Biden’s remarks may have been voiced in 1992, but they are entirely applicable to 2016. The campaign is already under way. It is essential to the institution of the Senate and to the very health of our republic to not launch our nation into a partisan, divisive confirmation battle during the very same time the American people are casting their ballots to elect our next president.”

Sen. John Cornyn of Texas said this: “I believe the American people deserve to have a voice in the selection of the next Supreme Court Justice, and the best way to ensure that happens is to have the Senate consider a nomination made by the next President.”

His colleague, Sen. Ted Cruz of Texas, also referred to tradition: “It has been 80 years since a Supreme Court vacancy was nominated and confirmed in an election year. There is a long tradition that you don’t do this in an election year.” But there had only been six outstanding election-year court vacancies since 1900 when Cruz made those comments, and each vacancy had in fact been filled.
Here’s Sen. John Thune of South Dakota in 2016: “Since the next presidential election is already underway, the next president should make this lifetime appointment to the Supreme Court.”

Here’s Georgia Sen. David Purdue: “The very balance of our nation’s highest court is in serious jeopardy. As a member of the Senate Judiciary Committee, I will do everything in my power to encourage the President and Senate leadership not to start this process until we hear from the American people.”

Here’s Wisconsin Sen. Ron Johnson in May 2016: “Instead of a lame duck president and Senate nominating and confirming, a new president and Senate — elected by the people only a few months from now — should make that important decision. I can’t think of a fairer or more democratic process.”

And here’s Ohio Sen. Rob Portman: “I believe the best thing for the country is to trust the American people to weigh in on who should make a lifetime appointment that could reshape the Supreme Court for generations.”

I could go on and on. Together, these Republican senators make an eloquent case against the position they find themselves in today.
Hypocrisy used to be the unforgivable sin in politics. But Donald Trump has normalized it, making it seem like table stakes in Washington.

Most of these senators will likely shrug if they do a 180-degree turn in four short years. Some will likely find a way to rationalize it, while others might just admit that their interests — and their standards — have changed.
Most of these senators like to see themselves as principled people. They like to think of themselves as patriots who uphold our country’s best traditions. But they have sacrificed so many of those principles by uncritically following President Trump out of fear of reprisal.

Conservative media is suddenly full of earnest concern about the dangers of an evenly divided court with open seat in a close election — exactly the circumstances they cheered in 2016. On Fox News, contributor Tammy Bruce even said that she believed that a quick confirmation of a Trump-appointed replacement would be the best way to honor RBG, even though the justice’s last public statement from her deathbed was literally this: “My most fervent wish is that I will not be replaced until a new president is installed.”

According to the Congressional Research Service, “On average, for Supreme Court nominees who have received hearings from 1975 to the present, the nominee’s first hearing occurred 40 days after his or her nomination was formally submitted to the Senate by the President.” Ginsburg died 46 days before the election; Trump and McConnell have already indicated there will be a brute force rush to confirm regardless of the outcome of the elections.

Politics is about power, but it should also be about real and consistent principles. And if the GOP pushes forward the next nominee, ignoring the standard they set four years ago — when many accused them of essentially stealing a Supreme Court seat — it will permanently cripple the court’s already diminished credibility as a place beyond partisan politics.

It could also unleash a tsunami of reprisals from Democrats — like moves to expand the number of justices on the Supreme Court or getting rid of the filibuster — that will cause the GOP to scream that traditions and democratic norms are being broken. The political heat on American streets will get hotter. I am concerned that the cascading effects will further divide our nation in bitter personal terms that could spill into a spirit so ugly that it will make the morally disfigured Trump years look like a bastion of bipartisan civility.

In the coming weeks, there will be a search for at least four Republican Senators who — out of principle or political self-interest — will say they will not support a Supreme Court nominee pushed through in these hypocritical and hyperpartisan circumstances.
Alaska Sen. Lisa Murkowski seemed to indicate that would be her position when she said last month, “When Republicans held off Merrick Garland it was because nine months prior to the election was too close, we needed to let people decide. And I agreed to do that. If we now say that months prior to the election is OK when nine months was not, that is a double standard and I don’t believe we should do it. So I would not support it.”

Maine Sen. Susan Collins and Iowa Sen. Chuck Grassley have also said they oppose a vote before the election, but they will inevitably face intense peer pressure. Meanwhile, an overwhelming number of Senate colleagues will go back on their statements and embrace hypocrisy, essentially saying that ethical standards are for suckers and losers.

I’d like to think that it does but that would be the triumph of hope over recent experience. Nonetheless, we should try to keep hope alive, because the alternative is too dark to contemplate.