Hillary and the 51% – The Daily Beast 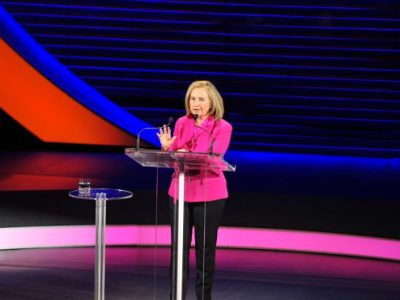 “Extremism thrives on anger and ignorance,” Hillary Clinton declared at the Women of the World Summit, taking aim at the Taliban and the repression of women and girls worldwide—what she called “the great unfinished business of the 21st century.”

This wasn’t a campaign speech. Put 2016 political horse-race handicapping out of your mind for a moment (I know, it’s hard). Instead, this was an address (you can read it in full here) that illustrated how Hillary Clinton has transformed herself from a polarizing political figure into an icon for feminists around the world and why she is surfing a global wave that could lead to the White House if she decides to run.

Surveying the aftermath of the Arab Spring, Clinton lamented that women were on the “front lines of the revolution, but denied a seat at the table,” and are “now facing a rising tide of sexual violence.” She spoke with evident frustration about the soft sexism that confronts advocates for women’s rights (“I’ve been kidded; I’ve been ribbed and challenged in boardrooms and official offices around the world”). And she balanced unapologetic advocacy with pragmatic arguments about economic benefits of progress backed by doses of wonkery (“great data from the World Bank”)—a patented Clinton-family formula.

Hillary’s stated mission—“fighting to give women and girls a fighting chance”—was received rapturously by her hometown crowd. But beneath the applause was an instructive bit of transference.

Even more than her husband, Hillary has become a symbol of something larger than herself. She is an embodiment of baby-boom second-wave feminists who see her elevation to the pinnacle of world affairs as their own story writ large. Now, they want to see her in the White House so they can die happy.

This is deliverance—the turning of the world from one that considered feminists radical to what is now the insurgent establishment trying to unite women around the world to flex their muscle consistent with their numeric weight as the narrow majority of people on the planet.

The ambition is clear, but the practical means of ascent is worth appreciation. Because Hillary Clinton has successfully transformed herself from one of the most polarizing personalities in American politics to our most broadly popular politician. And she has done it the old-fashioned way—through hard work.

First the former first lady put her head down in the U.S. Senate and earned the respect of skeptics and outright opponents, including North Carolina paleoconservative Jesse Helms (“one of the great minds of the 12th century,” Newsweek and The Daily Beast editor Tina Brown quipped during her introduction of Hillary). She was hawkish in the wake of 9/11 and proved able to work with the Bush administration on issues of mutual agreement, such as combating AIDS in Africa.

After her hard-fought presidential primary campaign in 2008 against Barack Obama, it seemed that the old polarizing reputation had reasserted itself. There was bad blood between the two Democratic camps, and Hillary’s supporters dubbed themselves PUMAs—standing, unceremoniously, for “party unity my ass.”

But with President Obama’s decision to invite his rival into his cabinet at secretary of State, her work ethic again won over hardened critics. She traveled tirelessly, visiting more countries than any of her predecessors did and cementing her reputation as a serious and inspirational figure in her own right. She worked herself to physical collapse at the end of her term amid false and nasty accusations that she was suffering from “Benghazi flu” and seems to have enjoyed just two months’ vacation before her reemergence on the stage.

Hillary Clinton’s rise has also been buoyed by something bigger than hard work. It is the vindication that eventually comes when your struggles are seen to be on the right side of history. In the 1990s she was relentlessly tarred with Rush Limbaugh’s “femi-Nazi” brush. Her now lionized 1995 speech at the U.N. conference on women’s rights in Beijing was attacked and mocked by the usual suspects at the time.

But Hillary Clinton has outlasted many of her critics, a position made possible by a 20-year public career and as demographic trends have finally come to pass. This, it should be said, is one benefit that can come from the progressive rather than conservative position on many public-policy debates. The final kicker has been globalization and the rise of new technologies that make the dream of feminism in the developing world actually possible. The fact that the totalitarian impulse of radical Islamists represents the greatest threat to feminists in the world today lays the groundwork for a broader coalition backed with self-evident moral clarity.

And so Clinton finds herself in that rarest of positions—the living martyr, the vindicated political outsider with insider experience and one more political life cycle ahead of her. And in a time when percentages seem to define political debates, from Occupy’s 99 percent to Mitt Romney’s disastrous 47 percent, Hillary Clinton’s ambitions seem backed by the 51 percent—the percentage of women in the world as well as, in a happy coincidence, the necessary edge in an election.


This entry was posted in Columns and tagged 2014 Elections, Elections. Bookmark the permalink.