Jim Harrison Can Make You a Better Animal – The Daily Beast 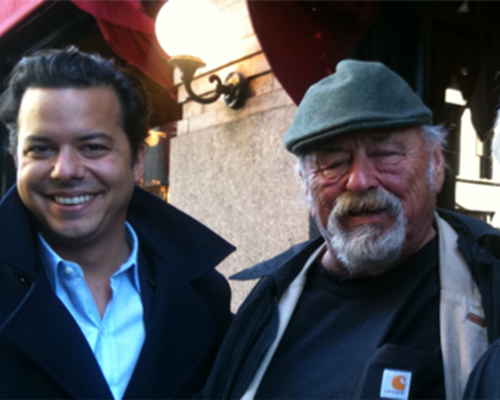 Arguably America’s greatest living author—and certainly our earthiest—lives half the year in Livingston, Montana. It’s a town grounded in the early 20th-century West, with neon signs on brick buildings and mountains in the background, all crowned by a former train depot that was once the preferred entrance to Yellowstone National Park.

The town is a reminder of a time when authors were respected ambassadors of a mythic America, the dream readers who could shrink large distances with their dispatches, articulate outlaws who could drink and fight and fuck and still file on deadline, drawing a straight line from Jack London to Ernest Hemingway with a thousand wasted wannabees in between.

Jim Harrison steps out of that tradition, but with contempt for its pretensions. He is all appetite and no apologies. And so the author of Legends of the Fall and 30 other books, including The Farmer’s Daughter (newly released in paperback), is one of the most accessible of modern American writers whose work is filed under “literature.” He is not locked inside his head but connected to the land and heart and, especially, stomach. For all his freely admitted highs and lows, buoyed by lust and flashes of violence, he keeps the virtues of kindness and forgiveness close. His writing reminds us to try our best to be happy animals in an unsentimental world.

Harrison lumbers into the lobby of Murray’s Hotel, his face like a weathered tomato and topped with thinning gray hair, windswept and spiked up at all angles, punctuated by a goatee hanging off his prodigious chin. He is an immediately warm and welcoming presence, offering easy greetings to the woman behind the counter. He has a rasping, rich laugh, and a higher-than-expected voice capped with a flat Midwestern accent courtesy of his Upper Michigan Peninsula background.

“Let’s take a drive,” he says, and we pile into his white Toyota truck with an overflowing ashtray and an image of the Virgin of Guadalupe glued to his steering wheel. He explains the draw of the town, “millionaires and people on Food Stamps living on the same street, and they still talk to each other,” as we roll over to a park overlooking the Yellowstone River. “I can’t keep off the river. It’s such a beautiful place to be compared to anything else.”

One the mysteries of Harrison is how his love of remote American locations—where his stories almost always take place—is balanced by his times as a scriptwriter in Hollywood hanging out with Jack Nicholson in the ’70s, fishing in Key West, and periodic indulgences in New York and Paris. “Well I have to have both. If all I did was pretend I was Wilderness Jimmy I would go stale. You know, I fish maybe 100 days of the year and bird-hunt, but if I didn’t go to Paris once or twice a year, I’d be crazy.”

Harrison is working on a new novella and an upcoming novel titled The Great Leader after a 10-year stretch from roughly age 60 to 70 in which he published 10 books. “I got Type 2 diabetes, but I recovered very quickly from that. I got used to drinking far less, which exponentially increased my energy for writing. Which it was a problem too, you know… After a few years of possible overproductivity, I had to take a break ’cause I was getting goofy. I was even making up paragraphs when I walked to the mailbox. I couldn’t go anyplace without writing it,” Harrison explains over a cigarette, alternating between American Spirit Lights and Naturals. “Then a couple doctors told me my problem was chronic exhaustion. In other words, I couldn’t get rested by sleep. I could sleep 10 hours and nothing… I used walking and fishing to re-gather. When you’re chronically exhausted, you just have to do something else. You can’t recover doing the same thing.” He stops to point out a bald eagle landing on a rock in the river.

It seems odd that this most American of writers sees half his income from French book sales. But it’s only a surprise on the surface—a healthy preoccupation with food and sex are what sets Harrison apart from other contemporary American authors. He is the anti-puritan: “I was an evangelical briefly,” he said, “and then I discovered pussy.”

“Have you ever noticed the painters tend to be more sensual, and better cooks than writers? And the French, when they’re having lunch or dinner, they’re talking about what they’re gonna have the next day. Whereas food in America is still predominantly a fuel stop.” Among his next intended projects is a book on food with his friend, Mario Batali—“it’s mostly going be about our enthusiasms, you know…I don’t have time to be snarky.”

He takes a dim view of the creeping social conservatism in our culture. “My wife and I were married in the ’60s, when this neo-Puritanism was definitely not true…. Although Rex Reed said once that AIDS has done more for sexual fidelity than the Bible, you know. I had a doctor say to me once ‘just don’t have anything to do with a girl that hangs out with musicians.’ He’s probably on the money, if you think of it demographically.”

As I newly married guy, I wanted to learn the secret of his improbably durable 50-year marriage. “Marriage is survived just on the basis of ordinary etiquette, day in and day out. Also cooking together helps a lot… I’ve seen all these marriage that failed. Those people are always hollering at each other. That doesn’t work. Do you remember the ’70s, they had all these ‘empowering’ groups where you tell everybody everything? That doesn’t work in a marriage either. That’s stupid. That’s what the French have figured out,” before adding parenthetically, “I really think adultery is a sport in France. I’ve watched it over the years. That’s just sort of what it seems to me.”

But it’s the compulsion to write that drives him, a non-optional pull from the subconscious. Of his perhaps most famous novella Legends of the Fall, Harrison says “I thought about it for a half a dozen years before I wrote it. When I sat down to write it, I wrote it in nine days and only changed one word. That one was like taking dictation. But I knew the people so well. Just like when I started Dalva I was at the point I was actually dreaming about this person, you know, like the first scene in which she’s sitting on a balcony in Santa Monica, listening to the coastal highway, thinking of Nebraska. Your subconscious mind is trying to help you all the time, that’s why I keep a journal, not for chatter but for mostly the images that flow into the mind or little ideas. I keep a running journal and I have all of my life, so it’s like your goldmine when you start writing.”

Harrison’s writing has an arm’s-length relationship with pop culture—his stories exist outside it, but the characters punctuate their identity with references. “That’s the way we move now,” he explains. And as a product of the ’60s, music is an important source of inspiration release. “Lately, I’ve been listening to this Argentine composer, Golijov, who did a record with Dawn Upshaw singing, but everything from that to Merle Haggard. I mean I go across the lines. I loved Los Lobos early on, before they really got popular. The Grateful Dead, Pink Floyd. I also like the Stones, Neil Young. All my years in Key West, about 20 fishing years there, I was haunted by Neil Young. You know, when you’re drunk, you’re coked, you’re stoned—then there’s Neil Young: ‘I’ve been to Hollywood, I’ve been to Redwood.’”

When the watch hits 4:30, it’s time to head to a local tavern, where Harrison sits outside and drinks a glass of Absolut on the rocks with a lime, good naturedly fending off a few would-be hangers on.

On the subject of contemporary politics, Harrison has even less patience for hypocrisy and amplified ignorance. Take the Arizona law, in effect along the southern border where he lives in the winter. “This Mexican family that works for me, they’ve been in America for 160 years. And the guy says, ‘Does this mean I’m gonna have to show some papers? Nobody has papers.’ See, that’s what’s wrong with the law. Look, I’m outdoors a lot so I get dark. Guess who gets stopped? I’ve been pulled over and they ask ‘where are you from?’ I say ‘Montana.’ They say, ‘Are you sure? And I say ‘I’m reasonably sure I’m from Montana, but you know, this is a dream life.’ You start on this shtick with them and it’s fun. I mean it’s profiling, but then I’ve got kicked out of three bars for being an American Indian. Which I’m not, but they have this idea just dreamt up. I’m in this strip club and they say ‘we can’t serve you in here, we can’t serve Indians,’ and I start talking about ‘my people.’ You know I get into it.”

Harrison’s not the kind to criticize without offering a solution, however. “The Arizona border is such hard terrain, the patrol should be on horseback, but they aren’t. You’ve got to go to Montana and Wyoming and Nebraska and recruit a thousand hard-asses on horse if you actually want to catch anybody, the smugglers basically.”

But for all the grating arrogance of politicos and self-appointed culture commissars, Harrison hasn’t succumbed to that gripe of the aging which glorifies the past and pretends that end days must be near. “People keep saying that that everything’s getting worse but when I was your age I had to go through the murders of John Kennedy, Bobby Kennedy, Martin Luther King, early civil-rights marches with workers getting murdered in the South. How can they say it’s worse now? It isn’t.”

Because he is willing to call bullshit on the accepted hypocrisies of our society, by being a poet without pretensions, Jim Harrison is an American treasure. He is a hard-living Mark Twain who doesn’t buy into American mythology wholesale but instead keeps faith with the American experience as a witness. Reading Jim Harrison can help you be a better animal, balancing the examined life with unselfconscious enthusiasm for living. He is a direct connection to the dwindling tradition of the literary outlaw, offering a sip of the frontier spirit that says that if you think for yourself and stand on your own feet, you’ll find yourself in good company—one way or another.


This entry was posted in Columns, Featured Columns and tagged Book and Movie Reviews, Music, The Daily Beast. Bookmark the permalink.