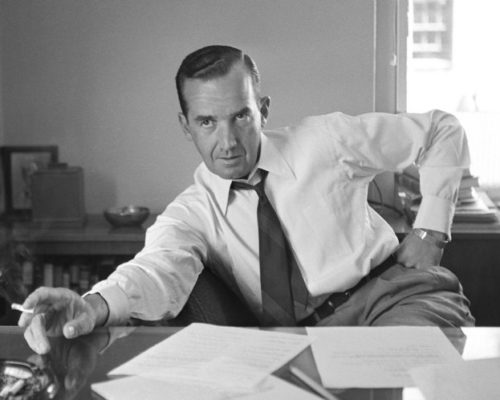 The time for hand-wringing and hysteria is over. The Trump presidency promises a civic stress test. In a time of principled fights, citizens and journalists need to respond with fearlessness rooted in fairness.

“We must not confuse dissent with disloyalty…We will not be driven by fear into an age of unreason.” – Edward R. Murrow

Given everything we know about Donald Trump from his divisive, demagogic presidential campaign, the next four years will be a stress test for the American system.

The Trump Years promise to be full of Oval Office insults, Twitter attacks and disregard for facts. But rather than viewing the prospect of covering a Trump administration with exhaustion, we should feel invigorated. Because when this time is done, we will look back on it as the best and most important time to be a journalist – not because it was easy, but because it was hard and our sense of mission was clear: to respect the office of the President while holding the person in power accountable against a standard of enduring American values.

For journalists, Edward R. Murrow offers durable inspiration. The man who brought the Battle of Britain home to Americans via radio and pioneered TV News at CBS, is probably best known today from “Good Night and Good Luck,” directed by George Clooney. Murrow famously risked his career to confront a popular and powerful conservative populist demagogue, Senator Joe McCarthy. He secured his legacy through a commitment to independence and integrity.

McCarthy used lies and innuendo to intimidate critics, famously parading a fake list of communists in the State Department, accusing a Democratic administration of participating in a vast conspiracy to subvert our sovereignty and falsely declaring that the ACLU a communist front group. In an ironic bit of symmetry, among his aides was a young true believer named Roy Cohn, who would later become attorney for both mob bosses and Donald Trump. It was from Cohn that Trump learned to never apologize, always attack.

Trump’s political success was based on declining trust in all civic institutions – especially the media. Not coincidentally, this decades-long decline directly parallels the rise of partisan media, which has allowed people to self-segregate into separate political realities. As conservative radio host Charlie Sykes recently reflected, “We’ve basically eliminated any of the referees…we have spent 20 years demonizing the liberal mainstream media…But, at a certain point you wake up and you realize you have destroyed the credibility of any credible outlet out there.”

This election’s sinister innovation of “fake news” came when this diet of confirmation bias collided with click bait, polluting our political waters with propaganda.

Journalists determined to hold Trump accountable must understand that offering nothing but reflexive criticism will reduce their credibility. We’ll need to give credit for the policies the administration gets right so that our criticisms carry weight. We’ll need to offer a roster of reporters and columnists with credibility on both sides of the aisle instead of predictable partisanship.

But it does not mean surrendering our principles or indulging in the idiotic “on-the-one-hand, on the other” drift toward moral relativism that blurs the line between fact and fiction. Separating truth from lies is journalism’s core responsibility. When a McCarthy defender accused Murrow of “bias and hypocrisy,” Murrow coolly replied, “If the weight of public testimony has tended to show that so far, Senator McCarthy’s charges are unproven, that is not my responsibility.”

Of course, aiming for the truth doesn’t make you immune from criticism. Some conservatives will call anyone who isn’t conservative a leftist and unleash howling Twitter mobs on them. Liberals have their own identity politics litmus tests that the more militant among them trot out to condemn any one who dares disagree with them.

Here, too, the example of Ed Murrow offers some perspective. Before taking on McCarthy, he was considered a fairly conventional anti-communist, backing the execution of the Rosenbergs for spying on behalf of Russia. He’d also been called a warmonger by isolationists for his belief that American should stand up to Hitler. Contrary to his critics’ caricatures, Murrow was not a Democrat or a Republican but a registered independent. As his colleague Charles Collingwood said, “His politics were based on old-fashioned notions of morality and honor, not ideology.” His influence stemmed from his independence.

But after taking on McCarthy, Murrow was called a communist “fellow traveler” and worse. The Wisconsin Senator denounced him as “the cleverest of the jackal pack, which is always found at the throat of anyone who dares to expose individual communists and traitors.”

Conservative columnists constantly attacked Murrow and his crew, driving the broadcaster Dan Hollenbeck to commit suicide. J. Edgar Hoover ordered an expansion of his FBI file. Murrow’s eight-year old son was subjected to slurs and their home was inundated with letters and postcards of hate, the doxxing of his day. When asked how they were holding up, his wife Janet calmly explained “we were under worse in London.”

That is the sound of perspective. Journalists who’ve stood up to Trump, particularly those on the center-right, were trolled and doxxed throughout the campaign. The Daily Beast’s reporters were threatened by Trump’s senior staff, our site was denounced by the candidate and we were among the first news organizations to be placed on his campaign’s blacklist. Reporters from the Washington Post to the Arizona Republic received death threats for daring to criticize – or not endorse—The Donald. Trump allies have doubled down on the campaign’s blacklist by floating the notion of an “enemies list,” echoing Trump’s favorite ex-president, Richard Nixon. Trump and his geo-political paramour Vladimir Putin have a common aim to intimidate critics while creating the false sense of security that comes from rallying around a strong man draped in the flag.

But Murrow would not back down, famously confronting McCarthy on his show “See It Now” in the spring of 1954, subjecting his opponent’s statements to the cool scrutiny of facts combined with unusual eloquence for a television anchorman.

His words echo with new urgency today. “We must not confuse dissent with disloyalty. We must remember always that accusation is not proof and that conviction depends upon evidence and due process of law. We will not walk in fear, one of another. We will not be driven by fear into an age of unreason if we dig deep in our history and our doctrine and remember that we are not descended from fearful men, not from men who feared to write, to speak, to associate, and to defend causes which were for the moment unpopular.”
Murrow’s stand drew accolades – he was praised by the New York Times for “crusading journalism of high responsibility and courage, “ reflecting “enlightened citizenship” while offering an “indictment of those who wish the problems posed by the senator’s tactics and theatrics would just go away and leave them alone.”

But he did not turn the tide in one night. His cause was, at the time, unpopular. In fact, days after the broadcast, the president of CBS showed Murrow a poll that showed “more people trusted McCarthy than Murrow, and that one-third of the respondents considered Murrow to be ‘Communist or Communist sympathizer.'”

Truth often loses battles on the way to winning the larger war of history’s judgment. Murrow’s advertisers came under fire and his show was disgracefully moved to the comparative Siberia of a Sunday afternoon time slot, when corrupt quiz shows were deemed less problematic and more profitable. Murrow mocked the idea that “we must at all costs shield the sensitive citizens from anything that is unpleasant…[or] eliminate something that might offend some section of the community.”

Even now, we are seeing success among news organizations that have maintained the courage of their convictions rather than simply playing to the lowest common denominator. The New York Times is seeing a surge in subscriptions since Trump’s unexpected win while the Washington Post has achieved profitability. At The Daily Beast, we have seen another record year in terms of traffic and revenue, reaching more than 1 million readers a day with high loyalty and engagement – more than doubling our traffic from four years before. The lesson is clear: quality journalism attracts a quality audience.

In time, Murrow’s example inspired courage in other citizens that ultimately reached the halls of Congress. When the lawyer Joseph Welch confronted McCarthy by asking “have you no sense of decency,” that courage became contagious, inspiring Republican colleagues like Margaret Chase Smith to stand up to the demagogue, spurring a Senate investigation into McCarthy and his tactics. Republicans who denounced candidate Trump as dangerously irresponsible, ignorant and unqualified are now lining up to get on board – some motivated by a sense of service, others by rank opportunism. Reform Republicans will be a critical principled balance of power in our era as well.

Trump is, of course, not McCarthy. For one thing, he is far friendlier to Russia. But the point of studying history isn’t the search for perfect parallels but finding the courage to confront our own challenges, armed with a sense of perspective. Mark Twain reportedly said, “history doesn’t repeat, but it often rhymes.” Maybe Donald Trump will be the first person in human history to campaign as a demagogue and not govern as one. We’ll hope for the best but prepare for the worst on that front. But we already know that how we handle the next four years as a nation will echo across this century.

Trump’s rise coincides with a broader ethno-nationalist pushback against liberal democratic values occurring across the western world. Already, studies are showing that only 30% of millennials feel it’s essential to live in a democracy, compared to 75% of their grandparents’ generation, who actually had to fight for freedom against fascism and communism. Situational ethics is rampant, with Republican approval of Russia’s Vladimir Putin skyrocketing after it was revealed that his government tried to influence the election on Trump’s behalf. Willful ignorance is on the rise as well, with nearly 50% of Trump voters believing the unhinged fake news story that Hillary Clinton was involved in a sinister, non-existent, pedophile ring. These trends represent a crisis of our capacity for self-government.

This is our generation’s responsibility to fix. We sometimes simplify the risk when we look back at moral battles in history. But the actors then were surrounded by doubt. They didn’t know how it would all turn out. The best we can do is imagine how the choices we make today will look in twenty years time and act accordingly. That also means resisting cynical arguments for inaction that often provide a fashionable mask for fear.

The character of our country didn’t change on Election Day. Trump’s mandate may be thin – after all, he lost the popular vote by an unprecedented 2.9 million and won the Electoral College by a margin of roughly 100,000 in three states – but he will be our next president. We should all want his administration to succeed so that our country succeeds. And so we must find a way to unite as a nation without falling into the trap of normalization, shrugging off Oval Office Twitter attacks on dissenting citizens or private businesses, reframing lies as simply exaggerations and undermining the integrity of facts by labeling all news “fake news.” We cannot turn our backs on our best, most inclusive traditions.

“We can deny our heritage and our history,” Ed Murrow warned, “but we cannot escape responsibility for the result.” This is on us, not just journalists but all citizens who are committed to putting patriotism ahead of partisanship. This is our Murrow moment.


This entry was posted in Columns, Featured Columns. Bookmark the permalink.