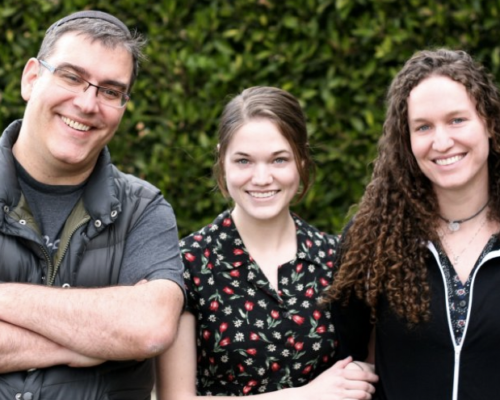 On Thursday afternoon Megan and Grace Phelps-Roper visited the Museum of Tolerance in Los Angeles. They’d been inside only a few minutes when they saw a photo of their family.

There, as part of the permanent exhibit, was an image of their grandmother and sister at the murder trial of Matthew Shepard’s killers, holding the signs for which the Westboro Baptist Church has become infamous: “God Hates Fags,” “AIDS Cures Gays,” and “Matt in Hell.”

This was once their way of life. Now 27, Megan had been taken to protests since age 5; her younger sister Grace had been attending since birth—all as part of the Kansas ministry founded by their grandfather.

Four months ago Megan and Grace decided to take a different path. They left Westboro Baptist Church and were excommunicated by their family. Now they are embarking on an adventure in the wider world together, spurred by a determination to think for themselves and reconcile their faith with reality. In the process, they are meeting a wider array of people than they ever expected and breaking down the fear-fueled stereotypes that defined the world to them—and vice versa—for so long.

“We were taught that what we were doing was the only thing that would help people,” explains Megan. “Because from their perspective, everything bad that happens in the world is because people don’t obey God. When people don’t do what he says, then horrible things happen: school shootings, tornados, and hurricanes. So if I really care about people, I’m going be out there with a sign … Looking back, I knew that it was hurtful emotionally for people, but I thought that if it caused somebody to believe and to obey God, then their lives would be so much better.”

“You’re taught that everyone outside the church is evil,” adds Grace. “And we couldn’t change any of it, because if we disagreed, we would get in trouble.”

The culture of conflict bred an us-against-them identity among the church members. “They believe that Jesus said that ‘If you follow me, the world is going to hate you,’” says Megan, “and so when the world in fact hates their message and sometimes reacts violently, it definitely reinforces the idea that you’re right.”

But the vicious cycle of self-reinforcement can be broken. Three years ago, Megan and Grace were in Los Angeles to protest the Jewlicious Festival—a three-day extravaganza of music and food and speakers celebrating the people whom Phelps-Ropers actively believed were destined for hell. This year they are attending the festival as friends of David Abitbol, the editor of Jewlicious.com who puts on the festival each year with Rabbi Yonah Bookstein, to talk with the attendees about their change of heart.

It was an initial confrontation with Abitbol that helped bring this change about—a Twitter fight over whether Jews must repent turned into a longer emailed correspondence and then a meeting in person that helped crystallize some of their growing questions. It turns out that unexpected kindness can tear down walls.

“There was a disconnect between the way that I felt and the way I was taught,” says Megan. “We were told a lot of things that weren’t true, and we assumed they were true because we didn’t see any evidence otherwise. But we weren’t really looking.”

But the understandable external impulse to paint the Phelps-Roper family as simply monsters also misses the mark. “They are very engaged and attentive parents—they made sure we did well in school,” says Megan. “We read the Bible every single day, and we talked about events in the world every single day. We talked about events that happened and what the church’s interpretations were, every day.”

“Say what you will about the Westboro Baptist Church, but they raised a couple of really, really nice girls,” attests David. “They are wonderful guests, super polite and super friendly. And here’s my revelation: had Grandpa Phelps been my grandpa, I would have been no different. What makes Grace and Megan so remarkable is that I don’t know, if I’d been in the situation they had been, that I would have had the strength of character and intellectual integrity to walk away from my family.”

The decision to leave the confining comforts of home this past November was “awful,” says Grace. “I hope above all that I’ll get my family back one day—I think about it every day. And I miss my little brother and my sister and my cousins so much.” Because Grace was still in school, the girls drove into Topeka every day from nearby Lawrence, Kansas, until the end of the semester, facing daily reminders of their family and church, people who now consider them “the most evil of the most evil” and “corrupters who are going to hell.”

For the time being, the girls are living with friends in Deadwood, South Dakota. They have traveled to Brooklyn, New York, and Des Moines, Iowa, and now L.A. again—“driving around these streets that we picketed so many times on,” Grace reflects with a laugh. “It’s really nice not to have to be ready to fight with people at a moment’s notice.”

“I’m looking forward to hearing other people’s opinions and learning,” she says, about her weekend at the Jewlicious Festival. “I think it’s so crazy how everyone believes that their way is the right way and that their religion is right. And everyone thinks that. There’s so many different ways of looking at things. And when you listen to why people believe what they do and they explain it, it makes sense … I’ve been so impressed with the people we’ve met since we left and become friends with who are honestly seeking God and truth.”

“There’s so much that we didn’t know about the way people believe and how they live,” says Megan. “And we thought we did. We thought we knew. And we did not have a clue.”

When the girls left the Museum of Tolerance on Thursday, members of the staff hugged them after hearing their story. Megan and Grace are in the opening stages of an admirable American journey armed only with the determination to engage the world with an open mind and open heart. These virtues were not taught in their home; they were learned on their own. Their transformation might give more people courage and compassion. “We definitely want to find a way to help people and to do good,” says Megan. “We’re just trying to figure out how to do it.”


This entry was posted in Columns, Featured Columns and tagged The Daily Beast, Wingnuts. Bookmark the permalink.