Did Rick Santorum Win the Iowa Caucuses, Not Mitt Romney? – The Daily Beast 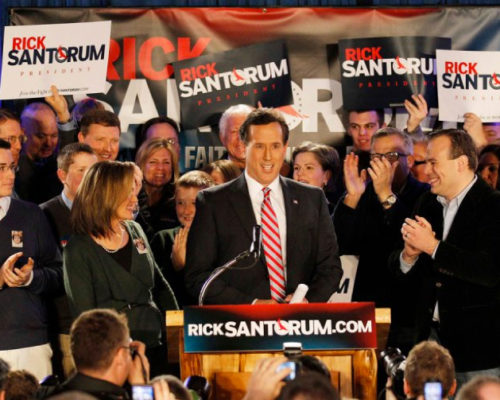 Incorrect precinct numbers from one Iowa town, and a 20-vote misallocation to Mitt Romney, casts his eight-vote victory in question—along with his claim to be the only candidate to win both Iowa and New Hampshire.

That’s what it looks like if numbers from a caucus in the town of Moulton, Appanoose County, are correctly counted when the official certification begins Wednesday night.

This not only would rewrite the election history of 2012 to date—it would invalidate the oft-repeated line that Mitt Romney is the only candidate to win both Iowa and New Hampshire. It would stop the inevitability narrative in its tracks.

This possibility has the Iowa state GOP under new scrutiny as they begin the official certification process, which they have promised to complete by the end of the week.

The national media to date has largely dismissed this story—which was first reported by local Des Moines station KCCI—apparently choosing to trust the state GOP’s initial off-the-record assurances that the story had zero credibility.

But multiple sources—including local county GOP officials—have now confirmed that the initial precinct numbers from Moulton were incorrect. And even the state party is no longer contesting the fact that at least 20 votes were misallocated to Mitt Romney, casting his eight-vote margin in question unless an even larger number of errors breaks his way.

Here’s what we know happened. On the night of Jan. 3, 53 people gathered at the Washington Wells Precinct in the town of Moulton, population 658, to caucus and cast their first-in-the-nation vote for the Republican nominee.

Among them was the fortuitously named Edward L. True, a 28-year-old independent contractor and a Ron Paul supporter. It was his first caucus, and he recorded the precinct results on a scrap of manila envelope paper—Bachmann 3, Perry 13, Paul 7, Huntsman 1, Santorum 21, Romney 2, and Gingrich 6—which he then posted on his Facebook page and the election watchdog website WatchTheVote2012.com. “Transparency is what we need in our electoral system to ensure that every vote does count,” True explains.

The local voting trend recorded by True roughly matched the other 12 precincts in Appanoose County, which all had either no votes for Romney or low-single-digit totals, except Vermillion Douglas Sharon, which tallied an outlier 20 votes. In general, the rural southeast corner of Iowa was not Mitt Romney country.

Given Romney’s alleged eight-vote victory, declared at 2:30 a.m., every vote mattered. But not every vote was counted accurately.

The next day, Edward True was surprised to see the official initial results incorrectly reported on a state-party spreadsheet—giving Romney 22 votes instead of the two votes he actually received at Washington Wells. In addition, and somewhat bizarrely, the former governor of Louisiana, Buddy Roemer—who had dropped out of the GOP primary contest weeks before—received six votes. The number of votes recorded in the precinct totaled 79, instead of the 53 votes actually cast.

“After I seen the results recorded, I immediately called Tony Siebert, the precinct captain, and he confirmed that my numbers were accurate,” True told me. He then called county GOP chairman Lyle Brinegar, who also confirmed his vote total and said that once it was all filed with the state, the numbers would be corrected. “I was told not to worry about it,” True said.

To verify True’s account, I made repeated calls to Lyle Brinegar, chairman of the Appanoose Republican Party, which were not returned. When I reached GOP county Treasurer Elaine Spencer, she nervously referred me back to Brinegar. But Brinegar’s co-chairman, Richard Taylor, readily confirmed the real vote totals.

“That’s correct,” Taylor said when I asked him whether Mitt Romney received two votes instead of the 22 in the Washington Wells precinct. “From what I understand it was an innocent error that was made up in GOP headquarters—just a human error and everything should be corrected when the final vote is certified by the state party.”

Taylor agreed that the winner of the Iowa caucus could change “if you just based it off these numbers—but there’s the possibility that other errors were made.” He noted that Rick Santorum had not complained despite this significant question mark while waiting for the official vote certification.

“I commend Mr. Santorum for handling this honorably,” Taylor said. “And shame on Mr. Romney for taking advantage of what might not be his to take advantage of. Hopefully everything will be cleared up soon.”

But when True called Iowa state GOP headquarters the day after the caucus to report the problem, he didn’t get a call back for more than 24 hours and then again was told not to worry about it—all while Time magazine was placing a smiling Mitt Romney on its cover, with the headline “So You Like Me Now?”

When local television station KCCI inquired about True’s totals, an Iowa Republican spokeswoman was paraphrased on background saying, “True is not a precinct captain and he’s not a county chairperson so he has no business talking about election results.”

“It seemed strange that I was being discouraged from talking about it when the [initial] numbers were inaccurate,” True said. And so he gave an affidavit, just in case.

As local media inquiries about Appanoose County increased, Iowa GOP chairman Matt Strawn released a statement expressing confidence that they “do not have any reason to believe the final certified numbers of Appanoose County will change the outcome of Tuesday’s vote.”

“That’s a 12-vote loss for Romney in my book,” Edward True told me. “I don’t know if my math is different than everyone else’s—but it’s straight-up ridiculous for them to say that the real total doesn’t change the results, when it does.”

“Delegate-wise, I understand why they’d say that it wouldn’t change the ultimate outcome,” True said, acknowledging that a numeric vote shift would have minimal impact on delegate allocation. “But media-wise, in terms of momentum and money and attention it matters a lot.”

It does matter a lot. Already, Romney’s electability narrative is centered on the argument that he is the only candidate to have ever won both Iowa and New Hampshire—causing some commentators to say that the nomination battle is all but over, despite only two states having held elections. It takes 1,143 delegates to win the Republican nomination, and to date Romney has just over 20, so the sanguine sense that the Iowa delegate count is likely to remain the same even if the popular vote count changes doesn’t cut it on the credibility front.

Media momentum matters disproportionately in the current system of nominating presidents that we have in place. If the wrong man is declared the winner, even temporarily, it has wide-reaching implications that can’t be entirely undone when the record is corrected. And if Romney is still declared the ultimate winner—as state party officials seem unsettlingly sure he will be despite the votes still coming in—it will be because even greater inaccuracies were found in his favor, doing little to increase confidence in the Iowa caucus after months of anticipatory coverage.

But to Edward True, this initial Appanoose vote-count fiasco doesn’t diminish his faith in the Iowa caucus system—far from it. “What this does, in my eyes, is ensure that Iowa should still remain the first in the nation,” he says, “because of the transparency that things like this are found out immediately and brought to light. It’s democracy in action.

“It has nothing to do with who I supported,” True concludes. “It has to do with the integrity of the election. And that should be a big deal to every single American.”


This entry was posted in Columns, Featured Columns and tagged 2012 Elections, Elections, The Daily Beast. Bookmark the permalink.