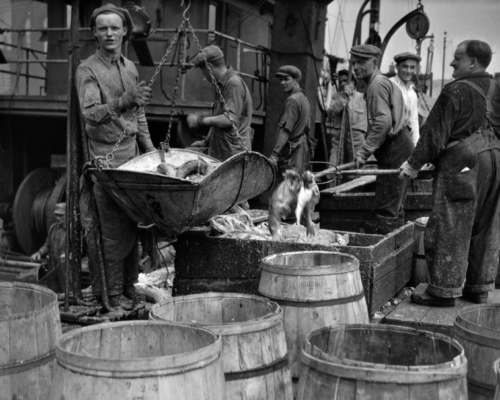 “Every now and then, seeking to rid my mind of thoughts of death and doom, I get up early and go down to Fulton Fish Market,” wrote Joseph Mitchell at the opening of his story “Up in the Old Hotel.” “The smoky riverbank dawn, the racket the fishmongers make, the sea-weedy smell, the sight of this plentifulness always gives me a feeling of well being and sometimes they elate me.”

One of the pleasures of living in New York City is the sense that you are never alone. It is not just the presence of people, or opportunities of all kinds at all hours, but the palpable presence of history around us. These are the streets where characters from novels and reality walked, and you can connect with their perspective by visiting the locations they once inhabited: Holden Caulfield in Central Park, Dylan Thomas drinking his last at the White Horse Tavern, Abraham Lincoln speaking at the Cooper Union. The absence of missing monuments leaves a lasting gap as well: the scenes that took place beneath the columns of the majestic original Pennsylvania Station, the first executive mansion where President Washington lived on Cherry Street, near where the base of the Brooklyn Bridge now stands. In a city where change has been the only constant, one feature of daily life in old New York has unexpectedly endured: the Fulton Fish Market.

It is not glamorous, but the ritual of bringing fish to market on the banks of the East River in Lower Manhattan has been a comforting constant for more than 175 years. Now, in the name of progress and increasing land values, the Fulton Fish Market is on death row. It has been granted reprieve years beyond what many expected, but next month appears to be its termination date – at which point the market will move uptown to the Bronx, and into a state-of-the-art air-conditioned terminal at Hunts Point. While rumors among fishmongers flow that the move could be delayed until November, this is certainly the last summer of its existence, and then it will fade into well-documented memory.

The impending end of the Fulton Fish Market has brought me and others down there with increasing regularity over the past months. One early April morning, I walked down there in the dark; the streets around it were empty, and then with a turn of the corner onto South Street, under the FDR Drive overpass, a new world exploded around me, the area lit up like a movie studio, the sound of forklifts, men gathering to stay warm around trash cans that glowed from fires within, large metal hooks in their belt. And then walking through the crowded stalls, the blood and guts of market commerce, buckets of fish, wide-eyed on ice with some smaller creatures still wriggling, thick steaks of sushi-grade meat, multi-foot monsters with their heads cut off, spines exposed, orders shouted, cash exchanging hands with the easy jokes between friends and clients who live a parallel life. With gradations of progress, wheelbarrows to forklifts, it has been going on like this since a young Al Smith – the future governor of New York and 1928 presidential candidate – lived and worked along Front Street to support his family after his father’s death, later bragging to his overeducated colleagues that the only degree he possessed was an FFM – from the school of life that was the Fulton Fish Market.

There have been marked changes to the area over time – the open air where great ships used to dock bringing their haul directly to market now is enclosed under the giant underpass, amplifying all sounds. The legendary seafarers’ restaurant Sloppy Louie’s, where Joseph Mitchell would retreat to “eat a big inexpensive and invigorating breakfast of tempered herring and scrambled eggs or a shad roe omelet” was closed more than a decade ago. The presence of the South Street Seaport amid the general revival of Lower Manhattan has driven up prices, and housing previously dismissed as undesirable because of the nightly chaos has been reimagined as luxury housing. Most of those residents will not miss the noise and funk of Fulton Fish Market, but the loss to future generations is incalculable – they will be cut off from part of their birthright as New Yorkers.

In an effort to preserve the Fulton Fish Market beyond its lifetime, several artists and filmmakers have been establishing a presence. Naima Rauam is a watercolor artist who pioneered the effort by setting up residence at the Fish Market for the past 20 years. Evita Mendiola is a recently graduated Columbia University student and photographer, who came down to the Market for a photo project and has become a part of the community. A documentary, titled “Up at Lou’s Fish,” directed by Corinna Mantlo and A.R. Brook Lynn, has been filming down at the Market since April and will chronicle the move to the new home at Hunts Point. Ms. Brook Lynn explained “We’re not interested in making a purely political history of the fish market, we want to focus much more on the men and women who work there, who have perpetuated the market, and what it means to the city.”

The impending loss of living history is drawing out sentiment for an unsentimental place. But there is reason for this: the Fulton Fish Market is our closest undisturbed link to the seafaring city that created the capital of commerce. Take a trip down there while you can, to experience firsthand what we have had the luxury of taking for granted for almost two centuries. And the wonder of the moment might make you recall the words of Joseph Mitchell’s friend, the proprietor of Sloppy Louie’s, who took pleasure in finding out the full history of the old building that housed his restaurant: “It connected me with the past. It connected me with old New York,” Louie explained. “It made the building look much better to me instead of just an old rundown building in the fish market, the way it looked to me before. It had a history to it, connections going back, and I liked that. It stirred up my curiosity to know more.”


This entry was posted in Columns, Featured Columns and tagged New York. Bookmark the permalink.