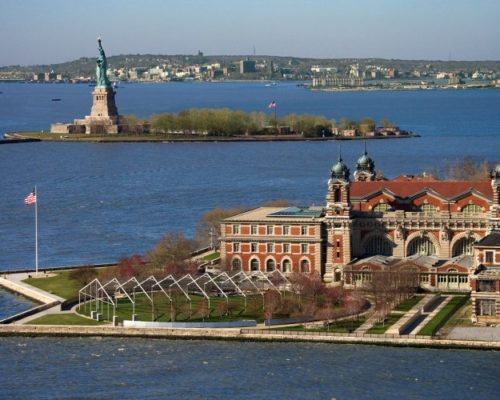 It’s easy to slag off big cities when you’re running for the red state nomination. It’s an urban vs. rural rivalry that goes back to Hamilton and Jefferson. But Ted Cruz misfired big time when he tried to get cheers from the cheap seats by stereotyping “New York values.”

The slick Harvard-educated lawyer and freshman senator from Texas ought to know better—and not just because he often decamps to the Big Apple to ask for money.

There’s more history and heritage in one square mile of lower Manhattan than in hundreds of scenic miles in Cruz’s home state.. So let’s be civil and join 9/11 widower John Smith’s invitation for Ted Cruz to visit the Ground Zero memorial—the ultimate contemporary expression of courage under fire that showed just how much unity can emerge from diversity. A few minutes of meditation there ought to erase any assumption that American values start somewhere west of the Mississippi.

But let’s not stop there. Walk a block east from Ground Zero and visit St. Paul’s Chapel, where President Washington prayed and Alexander Hamilton offered a eulogy for his fallen Revolutionary War brother-in-arms Nathanael Greene. The first known image of the national seal of the United States is there, an eagle over the national motto, e pluribus unum, “out of many, one.” It’s a good message to keep in mind when you’re running for president.

A few blocks south and west and you’ll find yourself at the corner of Wall and Broad Street, where a statue of George Washington stands atop the steps of Federal Hall. This is where Washington took the oath of office as the first president of the United States in April 1789. It’s also the spot where the first United States Congress convened and wrote the Bill of Rights, which ought to symbolize enduring American values to a constitutional scholar and U.S. senator.

Walk down the expanse of Broad Street, past the stock exchange that has created so much wealth over the centuries, and marvel that this was the first extended neighborhood in America to enjoy the innovation of electric light, thanks to Thomas Edison’s electric generation plant over on Pearl Street.

One block west on Broadway stood Washington’s second presidential mansion and Hamilton’s law offices, from which he argued some of the earliest Supreme Court cases after serving as our first Treasury secretary.

If you’re feeling thirsty or hungry from all the walking, by all means, duck into Fraunces Tavern, where Washington and the Revolutionary officers celebrated the successful end of the war for independence after eight long years. The restaurant’s owner was a West Indian immigrant, like Hamilton himself. Washington toasted the officers in 1783 with a nice summation of enduring values, wishing the assembled that “your latter days may be as prosperous and happy, as your former ones have been glorious and honorable.” The scope of the party took some of the sting out of the sorrow: the 120 guests drained 135 bottles of Madeira and 60 bottles of beer. Good times after hard work well done can reflect American values as well.

To burn off the meal, walk south toward Battery Park on the tip of Manhattan Island. You’ll see a massive stone structure that was once used as a U.S. Customs’ House (where Moby Dick author Herman Melville worked): it’s now the Smithsonian Museum of the American Indian. The Federalist Paper author and the first Supreme Court justice, John Jay, once lived there. In the tiny park at its feet, a statue of King George III was toppled by rebellious citizens and melted into musket balls to fight the British.
Don’t stop there. Walk down the center of the park, past memorials to the Dutch settlers who established the city in 1625 and past a battered bronze globe that once stood in the center of the Twin Towers. Once you reach the water’s edge, you’ll be staring out onto New York Harbor.

In front of you will be the Statue of Liberty and Ellis Island, side by side, separated by a sliver of water. This is it, the whole deal: American values in one vista. Independence and immigration are the two cornerstones of the American character, the balance between rugged individualism and the ever-expanding community that asks only for the equality of opportunity.
Freedom, opportunity, diversity— all enabled by hard work — that’s New York. We re-imagine those values for each generation, but one thing remains the same: this is the place that kids from all over the country and the world come to pursue their American dream.

So before you try to tap into anti-immigrant sentiment for political gain or pretend that American values are the exclusive purview of any region or people, think about whether you want to be president or just another cheap politician.
And don’t mess with New York.