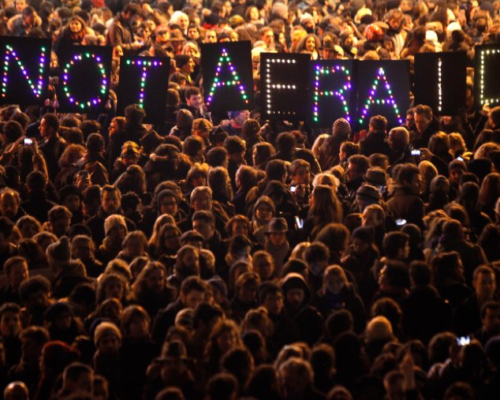 The massacre of cartoonists at the French magazine Charlie Hebdo is a crystallizing moment.

The shock brings clarity—a reminder that evil exists and free speech, no matter who might it offend, is a bedrock value of liberal democracy. An attack on journalists anywhere is an attack on civil society everywhere.

The closest parallels to this attack are last decade’s deadly riots over the cartoons of Muhammad published in the Danish newspaper Jyllands-Posten. But there are more recent echoes of this intimidation game in the brief panic over The Interview after the Sony hackers threatened 9/11-style retaliation if the film was ever released. For a time, theater chains and the studio caved. Then popular demand did an end-run around their cowardice and the film was released without consequence other than profit and laughter.

Terrorists, by definition, try to affect people’s behavior through fear. That is their strategy—violence is just a tactic. The right response is reflexive: Don’t ever give in to people who try to intimidate you. Instead, straighten your civic backbone and push back in clear conscience. Insist on your right to live in freedom from fear.

But even as blood and tears dry in Paris, we’ve seen supposedly civilized voices try to calm passions through accommodation. The Associated Press officially censored images of Charlie Hebdo’s offending covers from their coverage of the attack. Other major news outlets made the same decision, hiding behind a misplaced sense of multicultural sensitivity. But let’s be honest. The decision not to run the cartoons is motivated by nothing more than fear: either fear of offending or fear of retaliation.

There were tweedier arguments for accommodation as well. On Al Jazeera America, Arthur Goldhammer argued against reproduction of the images, assuring us that “If the magazine’s omnidirectional impudence had been limited to words, it probably would not have ended in a bloodbath.” FT columnist Tony Barber indulged in a lofty game of blame the victim, writing: “Charlie Hebdo has a long record of mocking, baiting, and needling French Muslims. If the magazine stops just short of outright insults, it is nevertheless not the most convincing champion of the principle of freedom of speech… some common sense would be useful at publications such as Charlie Hebdo, and Denmark’s Jyllands-Posten, which purport to strike a blow for freedom when they provoke Muslims, but are actually just being stupid.”

First, Charlie Hebdo was a proudly equal opportunity offender—as one of their journalists said, “We want to laugh at the extremists—every extremist. They can be Muslim, Jewish, Catholic.”

Second, the “common sense” standard advocated by Barber is essentially self-censorship—the ultimate condescension of applying different civic standards for different groups in Western society. This kind of excessive politically correct respect for multiculturalism can slide quickly into the swamp of moral relativism, where otherwise educated people shrug their shoulders and say dangerously dumb things like “one man’s freedom fighter is another’s terrorist.”

Finally, the complaint that Charlie Hebdo’s satire was “stupid” is a refrain also evident in the aftermath of The Interview incident: How come defense of something as important as free speech needs to be done in the name of sophomoric dick jokes?

True, this may not be what James Madison had in mind when he was writing the Bill of Rights. And it might be what Islamists complain about while sitting in their caves. But if constitutional scholarship makes your eyes glaze over, a quick look back at The People vs. Larry Flynt will remind you that the true test of principles in a civil society comes not when the decisions are easy but when they are hard. That’s why we have principles in the first place—to help guide us through murky debates.

Free-speech debates about pornography in public may be difficult, but humor should never really be a tough call. And the fact that satire unnerves the intolerant is evidence of its positive power. Apparently, fear of death doesn’t disturb Islamists as much as being laughed at. And let’s face it; trying to turn back the clock to the 7th century is darkly funny. The other obvious absurdity was captured in a tweet by Jeffrey Goldberg: “The gunmen’s basic message: If you don’t stop calling our religion intolerant and violent, we’ll murder you.”

So as the shock slowly subsides, what’s the proper response to this attack beyond bringing the killers to justice? Defiance. Resolve. That’s why republishing Charlie Hebdo’s offending covers was an easy decision at The Daily Beast after the attack. Newspapers around Europe have also done so in solidarity with the slain. Along with the massive rallies in support of the satirists, we send the same message: We’re not afraid. We will not be intimidated.

Standing up to extremists is one of the great challenges of our time. It is the obligation of citizens and journalists as well as governments. And we can confront the terrorism that too often comes from radical Islam without getting dragged into ugly, endless, existential debates about a clash of civilizations.

We can do that because of men like Ahmed Merabet, the police officer murdered by the Islamists on the street outside the offices of Charlie Hebdo. He was Muslim—something that apparently didn’t occur to the theological thugs with Kalashnikovs. Ahmed Merabet symbolizes the pluralism that comes with liberal democracy at its best, the transcendent diversity of individual thought and action that is the sworn enemy of all totalitarians.

In the end, the clarity that comes from moments of horror can help us recommit to deeper principles. Real liberal values—an unyielding defense of individual liberty and its essential tributaries like freedom of speech and freedom of the press—are worth fighting for without apologies. The choice between freedom and fear is not difficult when seen with perspective. And the slain satirists of Charlie Hebdo have given us a parting gift, the reminder that laughter can inspire the confidence and the courage to confront the absurdities of extremism.


This entry was posted in Featured Columns and tagged The Daily Beast. Bookmark the permalink.