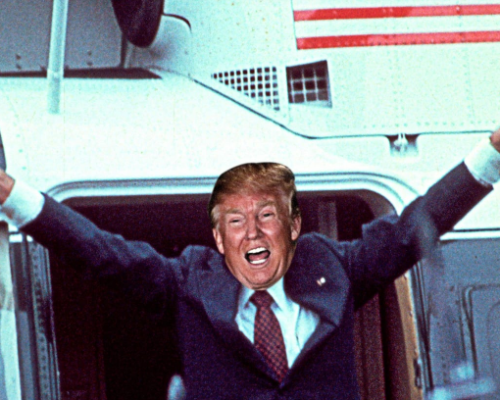 From the ‘Silent Majority’ slogan to the secret plans to win the war, a prodigious enemies list, and a surreal commitment to ‘bring us together,’ it’s Tricky Dick all over again.

And in true Trump fashion, he hasn’t been subtle about wearing his unfashionable influence on his sleeve. The signs are everywhere.

Travel through the primary states and you’ll see the placards plastered at events and scattered by the roadside: “The Silent Majority Stands With Trump.” That is, of course, a direct lift from Nixon’s oft-resuscitated slogan, which was meant to resonate with the “non-shouters, non-demonstrators” during the Vietnam War.

It’s no small irony that the children of these “forgotten Americans” now are being asked to rally around the ultimate shouter in American politics, a billionaire who avoided military service during the draft. The economic and cultural resentments of the white working class Nixon courted have only grown more intense in the wake of the Great Recession amid a fundamentally more diverse America led by a black president.

Days after kicking off his campaign, he told Fox News’s Greta Van Susteren: “I do know what to do and I would know how to bring ISIS to the table, or beyond that, defeat ISIS very quickly… and I’m not gonna tell you what it is… I don’t want the enemy to know what I’m doing.”

Trump’s love of bluster balanced with a complete lack of policy detail doesn’t stop with war.

Take health care: Trump is running on a platform of “repeal and replace with something terrific.” When pressed for detail by George Stephanopoulos, The Donald replied, “Nobody knows health care better than Donald Trump”—retreating to Nixon’s favored third-person self-reference. “We’re going to work with our hospitals. We’re going to work with our doctors. We’ve got to do something… We’ll work something out. That doesn’t mean single-payer.”

In Trump’s world, it doesn’t matter that he once backed single-payer in a book that bears his name. And of course it doesn’t matter that Nixon’s own health-care reform plan was considerably to the left of Obamacare. Our debates have been unburdened by fact for some time now, and that suits candidates like Trump just fine.

Nixon’s enemies list is another dark legacy Trump enthusiastically apes. Trump is quick to attack critics by name on the campaign trail—from mocking a disabled New York Times reporter to going after everyone from Megyn Kelly to George Will to The Daily Beast. For a candidate who loves to engage in rough-and-tumble verbal combat, his thin skin is a bit of a mystery. But Trump’s enemies list is so notorious that Vanity Fair lampooned it back in 2011 during his birther-backed flirtation with the presidency.

While Nixon’s enemies list can seem quaint almost a half-century later, they were far from simple partisan score-settling. We now know that Nixon’s lackeys looked at planting evidence on investigative journalist Jack Anderson, spreading damaging rumors about his sex life and even plotting to kill him, with the methods varying from putting poison in his medications to smearing massive doses of LSD on his steering wheel.

This is chilling stuff that smacks more of Vladimir Putin than an American president. But it’s a reminder of how much character matters in a commander in chief, because tone comes from the top. In an era of social media mobs and hardcore partisan news sites, pushback could turn to private citizen-directed opposition research and something uglier.

The deepest irony in the Trump-Nixon overlap has surfaced only in the past few weeks, as The Donald tries to appear more presidential. “Bring Us Together” was a signature Nixon 1968 campaign line, allegedly inspired by a sign held by a little girl at a rally and eagerly adopted by speechwriters like William Safire. Now Trump is punctuating his interviews and debate performances with the same line, promising to unite the nation if elected, despite all campaign tactics to the contrary.

Trump’s use of the line has already led to some surreal exchanges, as when Stephanopoulos asked him to explain how his opposition to marriage equality after the Supreme Court decision would lead to a more united nation. “It’s very simple,” he replied. “We’re going to bring our country together. We’re going to unify our country. We’re going to do whatever we have to do. I’m going to put the absolute best judges in position. If their views—we’re going to see what their views are. I will make the determination at that time.”

Such rhetorical tap-dancing means less than nothing and offers false comfort to some increasingly resigned establishment Republicans desperately looking for a silver lining if Trump is their party’s nominee. They hope the candidate doesn’t mean half of what he says, that he’s just pandering to get conservative populist votes. It’s a strained domestic extension of Nixon’s self-described “madman theory” in foreign policy, a belief that negotiating leverage is increased if your opponent believes that you might go nuclear. Extreme statements are all part of the art of the deal.

Perhaps not coincidentally, some prominent remaining Nixon aides have been backing or advising The Donald.

Trump’s sometime adviser Roger Stone, master of the dirty trick and artful smear, boasts a Nixon tattoo on his upper back. Former Nixon speechwriter and paleo-conservative populist Pat Buchanan, who innovated many of the anti-immigrant and anti-trade policies Trump now advances, declared him “The Future of the Republican Party.”

And while Trump’s once-close relationship with Fox News chairman Roger Ailes has been publicly strained with the recent Iowa debate boycott, Ailes basically innovated the cozy relationship between politics and television while working for Nixon in 1968.

Perhaps Trump is a secret political nerd who internalized all the divide-and-conquer strategies Nixon innovated at the time. Or perhaps he’s been getting advice on the dark arts of politics from acolytes of the former master.

Trump shares with Nixon a tough-guy pragmatism, a ruthless and occasionally unhinged determination to win driven by deep insecurity. Nixon also believed people vote out of fear more than hope. But whatever Nixon’s many failings, he was a policy wonk who loved the mechanics of politics. Trump is a blunt force instrument in politics, a born marketer with bluster a mile wide and an inch deep.

As he aims for the nomination, Trump might be taking Nixon’s cynical advice to “run right in the primary election, then run to the center in the general election” to heart. But as Nixon and the nation found out, character is destiny. And Trump’s exploitation of our worse impulses for political gain will also end in tears.