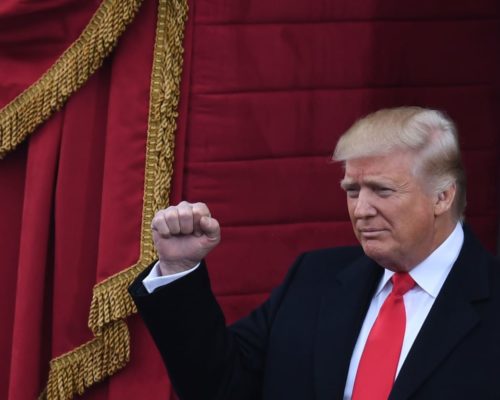 It started to rain right as President Donald J. Trump started speaking. And with the rain came the darkest inaugural address Americans have ever heard from a new president.

Inaugural addresses usually are written with an eye toward the sweep of American history. They build on campaign promises but pivot to the presidential perspective: aiming to unite the nation around a common vision, infused with humility and optimism.

Donald Trump instead offered a vision of “American carnage”—one often dissociated from fact and notably disrespectful to his predecessor and our nation’s role as a world leader.

This was an unreconstructed campaign speech, praising what he called “an historic movement, the likes of which the world has never seen before.” He played explicitly to his populist working class base—the “forgotten man” of his formulation—while all but ignoring the need to reach out beyond those confines to begin to close the gap that exists in the nation, evident in his unprecedented popular vote loss and his lowest-on-record approval rating for any incoming president. The words “liberty” and equality”—the traditional pillars of American political faith were not mentioned.

In the interest of a fact-based debate, let’s look at the some of the key lines from his depressive domestic tour of America today, beginning with the bunting. Trump declared “Americans want great schools for their children, safe neighborhoods for their families, and good jobs for themselves. These are just and reasonable demands of righteous people.” This is true and no person of any party would dispute it.

Then in one of the few moments of the speech that aimed for evocative imagery and emotion, he decried “mothers and children trapped in poverty in our inner cities, rusted-out factories scattered like tombstones across the landscape of our nation, an education system flush with cash but which leaves our young and beautiful students deprived of all knowledge, and the crime and the gangs and the drugs that have stolen too many lives and robbed our country of so much unrealized potential. This American carnage stops right here and stops right now.”

A few facts: crime and poverty in America’s inner cities are certainly problems, as they have been for decades. But crime is down across the nation over the past decade and particularly in inner cities, Chicago being a bloody exception.

Calling rust-belt factories “tombstones” may have been the most powerful imagery of the speech but it ignores—as his campaign did—that GDP and domestic manufacturing are actually up in America over the Obama years.

Our education system certainly needs reform—and for what it’s worth, I’m a big believer in expanding school choice—but graduation rates are up while teenage drug use and abortions are down.

These facts show that any vision of American carnage is fear mongering. The country Trump is inheriting has been improving fitfully but steadily over the Obama years. This is not a record of “empty talk,” as Trump put it to indirectly dis the outgoing president. The facts show that we are better off now than we were eight years ago: wealthier, safer and stronger by most measures. And this president will be judged by those standards.

If the speech reached the bar of “philosophy” set out by his advisors’ pre-game spin it was in the arena of economic affairs. The Reagan-era conservative standards of free trade and American leadership in international affairs has been declared dead under President Trump.

Here’s the promise of an avowed protectionist president: “From this day forward, it’s going to be only America first. America first. Every decision on trade, on taxes, on immigration, on foreign affairs will be made to benefit American workers and American families. We must protect our borders from the ravages of other countries making our products, stealing our companies, and destroying our jobs. Protection will lead to great prosperity and strength.”

Pat Buchanan or the most militant union leader couldn’t have phrased the protectionist commitment any clearer in their best fever dream.

Remember the Republican internationalism that united the party since Ike, reached its Cold War crescendo under Reagan and was extended to the Middle East by Bush 43? That’s gone, as well:

“For many decades we’ve enriched foreign industry at the expense of American industry, subsidized the armies of other countries while allowing for the very sad depletion of our military. We’ve defended other nations’ borders while refusing to defend our own and spent trillions and trillions of dollars overseas while America’s infrastructure has fallen into disrepair and decay.”

Take it all together and it looks like isolationists finally have their president. Somewhere Charles Lindbergh and Henry Ford are smiling that their phrase “America first” made it to the inaugural platform 77 years after they introduced it into the lexicon.

But there was notably few nods to American history in President Trump’s address. Instead, there was a litany of populist grievances combined with the self-congratulatory promise to finally let the people govern. The fact that anti-elite populist anger has been embodied by a celebrity billionaire has been surreal over the course of his 18-month road to the White House, but the idea that the people haven’t been electing presidents and representatives until now reinforces Trump’s peculiar self-importance, even among politicians.

Perhaps not surprisingly, the area President Trump sounded most confident and inspiring in was his promise to be a great builder. Never mind that the associated social spending on public works has been largely blocked by conservatives on Capitol Hill over the past four decades—this is an area in which Trump can lead and bipartisan coalitions might follow. The only problem is that the massive infrastructure plan has been pushed out past his first 100 days.

But inaugural addresses aren’t supposed to be about policy—they are about setting forward a positive vision for governing the whole nation while communing with the larger forces of history.

Trump’s dark inaugural failed to hit those inspiring heights and rarely seemed to even try. Instead of a sunny optimistic assessment about America, there was stormy pessimism. Instead of unity, there was division. Instead of embracing American leadership around the world, there was the promise of retreat. This was a departure from our best traditions and Republican convictions.

But this is the new president’s vision. Welcome to Donald Trump’s America.


This entry was posted in Featured Columns and tagged President Trump, The Daily Beast. Bookmark the permalink.