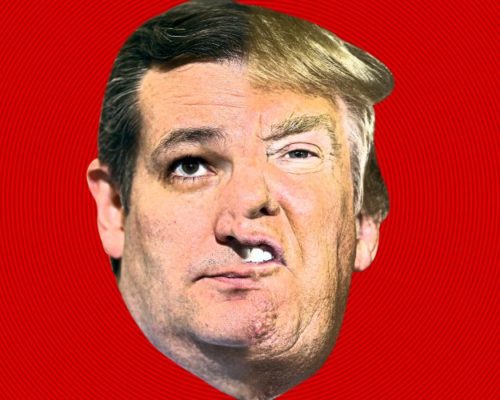 Donald Trump and Ted Cruz are two faces of the same phenomenon—the rise of conservative populism with a mean streak—empowered by the GOP’s purge of the center-right.

When asked to assess the presidential prospects of Donald Trump and Ted Cruz, Sen. Lindsey Graham famously said, “It’s like being shot or poisoned. I think you get the same result, whether it’s quick or takes a long time.”

Republicans breathing a sigh of relief because Cruz beat Trump in Iowa are rejoicing at the prospect of being poisoned. They may have dodged a bullet, but there’s a long-term critical condition they can’t afford to ignore.

Because Cruz and Trump do not represent different visions of the Republican Party so much as different manifestations of the same kind of conservative populism that gets weak-kneed watching a strongman preach with fact-free certainty from the right side of the “us vs. them” divide.

These Crump voters see incivility and inexperience as political assets. Their candidates are proudly dividers rather than uniters, channeling white populist anger at undocumented immigrants and Muslims as well as President Obama. Amid the emotional blurring of church and state, social-issue litmus tests have moved so far right that libertarians need not apply. The Crump coalition constitutes a majority of the Republican field right now. And they can’t win a general election.

The rise of Cruz and Trump are symptoms of a larger problem in the GOP, a problem of their own making. Because the Republican Party systematically purged its center-right, it doesn’t have the ballast to withstand Wingnuts anymore.

Trump’s strength in national polls, where he still leads by double digits, was spurred by fear-mongering over illegal immigrants, Fortress America promises to build a border wall, and a proposed ban on Muslim travel to the United States. This precipitated a brief nervous breakdown on the part of the conservagencia because they were forced to confront the possibility that their base was not motivated by ideas as much as bias, easily duped by a celebrity demagogue. Commentators who rose to prominence with the Tea Party, like Matt Lewis and Erick Erickson, were suddenly denounced as RINOs and cuckservatives for questioning the wisdom of backing Trump.

And while conservatives might be relieved by the Iowa results, Ted Cruz does not represent a return to normalcy in the GOP. Despised by his Senate colleagues, his chief accomplishment is shutting down the government, leading a coalition that his fellow Republican Devin Nunes memorably described as “lemmings with suicide vests.”

He is campaigning on abolishing the IRS, building a wall along the southern border, and returning to the gold standard. The onetime constitutional lawyer doesn’t accept the Supreme Court’s decision on marriage equality as settled law, telling students at fundamentalist Bob Jones University “it’s not the law of the land.” It’s hard to tell whether he’s abandoned his senses, or whether he ever had any.

In contrast to Trump, Cruz is the darling of the conservagencia, because he reflects their beliefs. He is a card-carrying member of the sub-generation that grew up with the conservative catechism, a steady diet of right-wing texts offered up by his father. But unlike Paul Ryan, who also came up through these narrow ideological ranks in the wake of Reagan, Cruz did not try to fuse his politics with an inclusive vision or a belief in the positive virtues of governing. Instead, Cruz is all about grandstanding. And so, of course, is Donald Trump. It’s politics as performance art.

Not coincidentally, the Crumps have an overlapping base. Remember that for most of this race, Cruz was trying to play a long game of co-opting Trump voters, refusing to condemn anything the businessman from New York said, no matter how outrageous or offensive. This strategic calculation fits Churchill’s definition of an appeaser—someone who feeds the crocodile, hoping it eats them last. It also fits the Republican Party leadership’s relationship with angry right-wing populism.

The rise of Crump is a result of the RINO-hunting that narrowed the base to the point that the Grand Old Party can be easily hijacked by a small but intense group with little interest in winning general elections and even less interest in governing.
Faced with the rise of populism, some pundits are quick to point the finger at rule changes in the early 1970s that democratized the primary process. But opening the franchise for more representative results isn’t the problem.

The current mess began when mandarins of the conservative movement insisted that the two parties should be cleanly divided on ideological lines. This began the process of marginalizing people who loudly espoused libertarian views on social issues or a more centrist approach to creating winning coalitions. Their efforts were reinforced by the rise of partisan media and the rigged system of redistricting, which has virtually eliminated competitive general elections from Congress.

Not so long ago, each party fielded a diverse coalition, with progressive Republicans from the North balanced by conservative Democrats in the South. A byproduct was a degree of stability in the system: Divided government was not by definition dysfunctional government because bipartisan governing coalitions could always be created, birthing everything from the Marshall Plan to the Interstate Highway System to civil-rights legislation to welfare reform.

But as geographic and ideological polarization took hold, those coalitions became more difficult to build. By the start of the 21st century, Karl Rove’s play-to-the-base strategy became the rage, arguing that a razor-thin win was as much of a mandate as a landslide. The red state versus blue state mantra meant that the centuries-old centrist New England Republican tradition was almost extinguished within a decade after running the region as recently as the 1990s. A generation of Republican mayors from Los Angeles to New York became urban legends in a one-part wasteland.

Then came the Tea Party freakout over the election of President Obama, compounded by economic panic in the first few months of the Great Recession. While the Tea Party initially tried to present itself as a libertarian-tinged poly-partisan protest for fiscal conservatism, polls showed that anger over immigration was an early trigger. Many protesters I interviewed were quick to bring up how long their family had been in the country and commented darkly about 2050, the year in which America would become a majority minority nation.

This was a new nativism, expressed in the bunting of “take our country back.” It was just the latest chapter in the culture wars, reinforced by conspiracy entrepreneurs in conservative media.

Whatever unhinged anger came out of the protests was more than tolerated with a wink and nod by Republicans who felt they could harness the fury into election victories and then channel it into something constructive once in control of Congress. But the mob quickly set the tone, creating conditions where elected leaders needed to pander to the outer reaches of politics to avoid their own primary challenges.

Center-right senators were the first to bite the dust, condemned as heretics to the cause. Majority Leader Eric Cantor was forced out of power in a primary; then Speaker John Boehner bailed once faced with another leadership fight because he occasionally dared to work with Democrats.

Crump voters now view experience as a sinful exercise in compromise. The most credible conservative argument against President Obama was his lack of executive experience as a first-term senator before reaching the presidency. But the top tier of GOP candidates—Trump, Cruz, Rubio, and Carson—have precisely no executive government experience between them and collected 75 percent of the Iowa caucus vote. The Republican governors—Christie, Bush, Kasich, Huckabee—are languishing in low single digits or suspending their campaign. Their experience is not seen as an asset among the new Know-Nothings.

Another measure of the creeping Crump cancer is the rise of Marco Rubio as the much-spun savior of the center-right. This “establishment” voice was a Tea Party insurgent six years ago. His rhetoric is optimistic and inclusive, but he continues to resist marriage equality and deny climate change, while abandoning his own immigration overhaul bill and opposing abortion even in cases of rape and incest. This is center-right only by the standards of the Crump era.

Speaking to The Daily Beast from Manchester, New Hampshire, Sen. Lindsey Graham was typically blunt in his assessment of the daylight between Rubio and Crump. “[Rubio] abandoned the immigration solution. He basically sounded like Cruz in the last debate,” the Jeb-backing Graham said on the day his South Carolina Senate colleague Tim Scott endorsed Rubio. “Our party’s got nuts again on immigration, and Trump started this. Trump’s position on immigration’s insane. What did we learn from 2012? We have a problem with Hispanics. Well, every problem we’ve had, Trump has made worse.”

The Republican path to victory means reaching out to women as well as Hispanics, according to Graham. “Name one person who’s been more insulting to women than Donald Trump. When it comes to abortion, I’m pro-life. [But] very few people support the idea of no exception for rape and incest. That will define Rubio and Cruz with young women… that you can have no exceptions for rape and incest, and sell it with a smile, you’re kiddin’ yourself.”

But the narrowness of the Iowa caucus reinforces all these impulses. Iowa itself is a highly educated, politically representative state—with more registered independents than Democrats or Republicans. But its centrist strain is filtered out by the caucus process—conservative activists and evangelicals dominate the turnout, causing the entire presidential field to contort. It’s a micro example of the macro problem the Republican Party is facing.

Cruz won 43 percent of “very conservative” Iowa caucus-goers. But New Hampshire polls show that he has the support of only 2 percent of moderate voters who make up the majority of voters there. And here’s the ultimate reality check: According to a recent WSJ/NBC poll, only 16 percent of Americans identify as “very conservative.”

Given the growing diversity of the American electorate and you have a disaster brewing whether Trump or Cruz is the nominee. Both men are underwater in support from independents, women, blacks, Hispanics, and suburban voters. They would only double down on the government dysfunction that’s frustrating to so many folks. And their influence over the increasingly narrow party base means that any other nominee will be forced to parrot their appeals and adopt at least some of their policies unless they have the courage to confront this cancer directly.

It’s time to stop pretending that the Crumps’ polarizing populist appeals represent ideas or ideals as much as channeling inchoate rage at changing demographics. The always thoughtful former Bush aide Pete Wehner recently wrote, “If Mr. Trump heads the Republican Party, it will no longer be a conservative party; it will be an angry, bigoted, populist one.”

But that prediction also serves as a diagnosis of the GOP’s predicament, which Trump and Cruz have only revealed. The problem will persist and lead to more general-election losses until the base of the party is broadened. Until then, the Republican primaries will look and feel like a fatalistic circus. As Senator Graham told The Daily Beast, “that’s what so stupid about this thing. It’s like buying a ticket on the Titanic after you see the movie. You know how it ends.”