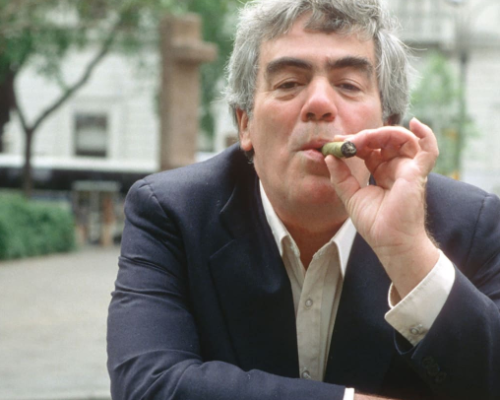 The great ones don’t age.

You can pick up almost any Jimmy Breslin column from his prime and it reads clean. The punches land with precision. He’s fearless. Funny as hell. And he can break your heart.

Line up your Pulitzer Prize winners for commentary, the Oscars of the columnist world, and not all of the other honorees fare as well. Some are stuck in the amber of self-importance or talk in jargon about political fights that fade with time and distance. But Breslin managed cinematic scope whether writing about forgotten men or fallen presidents.

His most iconic column, “It’s an Honor,” did both. While every other reporter in November of 1963 was covering JFK’s funeral, Breslin famously refused to be part of the pack. He called on the home of a man who dug graves for $3.10 an hour at Arlington Cemetery for a living, and captured the moment when Clifton Pollard answered the phone at his home one morning.

“Polly, could you please be here by eleven o’clock this morning,” [his foreman] Kawalchik asked. “I guess you know what it’s for.” Pollard did. He hung up the phone, finished breakfast, and left his apartment so he could spend Sunday digging a grave for John Fitzgerald Kennedy.”

The one that made me realize that newspaper columns could be art, though, came from the other end of that marathon of misery, a masterpiece called “A Death in Emergency Room One.” Breslin recounted the day of Dr. Malcolm Perry, who was on call when the call came in at Parkland Hospital in Dallas, and fought to save Kennedy’s life.

“He noticed the tall, dark haired girl in the plum dress with her husband’s blood all over the front of the skirt. Her face was tearless and it was set, and it was to stay that way because Jacqueline Kennedy, with terrible discipline, was not going to take her eyes from her husband’s face.”

The column closes with a simple, devastating quote from Dr. Perry: “I never saw a president before.”

I fell in love with Breslin’s work from a distance. I wasn’t part of the generation of journalists that came up in his shadow, unwisely wanting to be the next Breslin. I was too young to even grow up reading him in his prime in the newspapers. Instead, I discovered him in dusty anthologies bought in used bookstores. His recurring comic characters like Fat Thomas and Marvin the Torch were so surreal they seemed made up, but they were real characters from Queens.

The unflinching eye for detail made sense when I found out later, while interviewing Breslin for a segment on Reliable Sources, that he’d studied painting as a young man. It’s always seemed to me that most writers are either frustrated painters or musicians. The musicians write for the ear. The would-be painters write for the mind’s eye, and they’re better for it.

But I could never totally understand how this rumpled, raving genius was, by all accounts, almost comically rough in person. He did not suffer fools and could treat even friends with a razor’s edge. But he was unapologetically himself and he cared about telling other people’s stories with a dignity they were often denied in daily life.

Take “A Night to Be Jolly,” about a woman who worked at the El station in Astoria, giving out tokens and change. “It was Christmas for everybody else last night, but to Ida Ryan it was just an eight-hour shift in a change booth. Her husband, Jimmy Ryan, is in a cell in Attica State Prison. Her son, James Jr., is 18 and is in the narcotics ward at Manhattan General Hospital.” So she leaves her shift and walks to midnight Mass, surrounded by revelers. “‘I have to make it,’ she said. ‘I have more to talk about in there than anybody else.’”

Breslin’s outsize talent made him a celebrity newsman in ways that we can only imagine today. He ran for City Council president on a mayoral ticket with Norman Mailer, hosted Saturday Night Live, starred in raucous TV ads for Piels Beer, and his mythic status was a plot point for Bruno Kirby’s character in When Harry Met Sally.

But that status did not distract from his talent. The man was a deadline artist, and when my friends Jesse Angelo and Errol Louis and I decided to compile an anthology of America’s greatest newspaper columns, it was Breslin who most perfectly captured the improvisational art form with his column, “Are You John Lennon?” reported and written in two hours, between the time he got a call at about a shooting at the Dakota and connecting with the cops who delivered the still-breathing body of the Beatle to St. Luke’s Roosevelt Hospital. Breslin told the tragedy from the cops’ point of view, flashing back to summers on the beach listening to the Beatles, now confronted by a mumbling, bleeding body folded into a backseat. “John Lennon, whose music they knew, whose music was known everywhere on earth, became another person who died after being shot with a gun on the streets of New York.”

When we did the Deadline Artists anthologies, we got a ringside seat to judge the columnist competition across the decades. H.L. Mencken and Ernie Pyle may have more outsize reputations. Dorothy Thompson and Westbrook Pegler’s massive talents have faded from the public mind. Molly Ivins and W.C. Heinz still puncture the darkness brightly. In terms of consistency, Mike Royko and Murray Kempton came closest in their prime. But for my money, Jimmy Breslin was the greatest columnist who ever lived.

With this fan’s enthusiasm and a working stiff’s appreciation, The Daily Beast loved running “The Best of Breslin” on weekends as a regular feature. He visited our newsroom one day and we were thrilled as he regaled us with his stories. We were honored to publish his final story, an excerpt from an unfinished autobiographical novel. And it’s perhaps fitting that two weeks ago we designed a “heroes of journalism” poster for the newsroom with Jimmy claiming his rightful place alongside Orwell and others, grinning at us while drawing on a cigar, as if to say, “Keep your mouth shut and your eyes open and keep moving.”


This entry was posted in Featured Columns and tagged Deadline Artists, The Daily Beast. Bookmark the permalink.