Ed Brooke: The Senate’s Civil Rights Pioneer and Prophet of a Post-Racial America – The Daily Beast 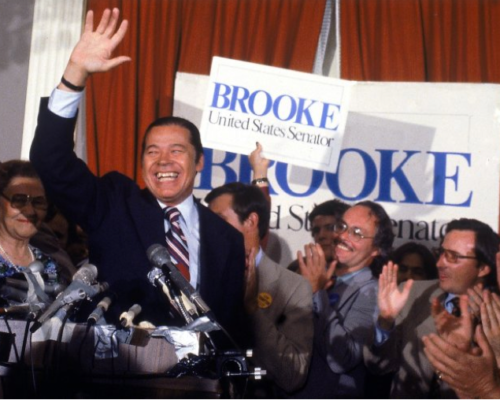 Ed Brooke was a man ahead of his time—a pioneer of the civil rights movement and a prophet of a post-racial America that is still beyond us. And like all prophets, he was under-appreciated by his country, his community, and his party for far too long.

In 1966, Ed Brooke single-handedly desegregated the Senate by becoming the first African-American elected by popular vote in American history as a Republican from Massachusetts—where less than 3 percent of the population was black and less than 1 in 10 voters were registered Republicans.

His Senate election occurred just three years after Dr. King’s “I Have a Dream Speech” and one year after LBJ signed the Voting Rights Act into law over the objections of GOP presidential nominee Barry Goldwater, a frequent Brooke foe. In 1962, when Brooke became the first African-American Attorney General in the nation, President Kennedy called it “the biggest news in the country.”

During his two terms, Brooke was discussed as a possible Vice President on Richard Nixon’s re-election ticket and then became the first Republican to publicly call for Nixon’s resignation after Watergate. He championed increased public housing, tax-credits for the working poor, fought for desegregation of public schools and uttered one of the first known calls for what is now known as cyber-security on the Senate floor, saying “for computer-caused invasions of privacy there are no laws. Here we must enact legislation to safeguard the constitutional rights of our citizens from cybernetic invasions.”

But despite the string of firsts that follows Brooke’s name, he was essentially ignored by otherwise exhaustive civil rights historians as well as his own party during the Reagan-Bush years. He was too much his own man for their tastes.

A native of Washington, D.C., and a graduate of Howard University, Brooke was called up after the attack on Pearl Harbor and ultimately served as a second lieutenant in the all-black 366th Combat Infantry Regiment on the front lines of Italy. He returned with a bride, Remiga Ferrari-Sacco, and earned a law degree from Boston University where he was editor of the law review.

Why was Brooke a Republican? As he described to me one of several interviews over the last decade, “The Republican Party was the party that gave hope and inspiration to minorities. … My father was a Republican. My mother was a Republican. They wouldn’t dare be a Democrat. The Democrats were a party opposed to civil rights. The South was all Democratic conservatives. And the African-American community considered them the enemy.”

When Brooke ran for Massachusetts State Attorney General, he ran under the banner of expanding the party and embracing the legacy of Lincoln. In office, to contemporary eyes he was perhaps too careful in pursuing a narrow civil rights agenda, but as he explained at the time, “I’m the lawyer for the 5 million citizens of Massachusetts, not only for its 50,000 negroes.” But he was unabashed about confronting his party’s rightward drift and calling for the GOP to fulfill its founding mission and support the Civil Rights Act. In a blistering critique of his party’s 1964 Goldwater-led lurch to the right, Brooke wrote, “Extremism was not only defended as a principle of good government; it was practiced as a tactic of intra-party politics. Portraits of Lincoln and Eisenhower were removed from the offices of the Republican National Committee. This gesture symbolized the tone of the entire 1964 campaign.”

But Brooke remained a proud, progressive Republican, concerned that the Johnson administration’s expansion of welfare would sap individual initiative and create an inter-generational cycle of dependency, saying, “If you give a man a handout you establish a chain of dependence and lack of self-respect that won’t be broken easily.”

Brooke’s election to the Senate in 1966 was national news. But as the energy of the civil rights movement shifted from the Martin Luther King’s comparatively centrist SCLC to SNCC and the rise of Black Power militancy, Brooke was seen as a sell-out by some, precisely because he was in a position of power. He was a believer in evolution rather than revolution.

In one of the most striking conversations of the era, ripe for a screenwriter but untold in full until Brooke’s 2007 memoir “Bridging the Divide,” Brooke met with militant leader H. Rap Brown in a Harlem basement during widespread riots in the summer of 1967. As a Senator in a blue suit met with a Black Panther in jeans and fatigues, Rap Brown declared, “You’re not black. You’re not one of us. You are part of the white establishment. You’re what’s wrong with America.”

Brooke responded, “I am what I think is right for America and for all of us. I think what we want and what we need is to be part of the system, and change it for the betterment of our people. What’s wrong with being in the U.S. Senate at the seat of power? That’s where the action is. That’s where the power is. That’s where we can get housing, jobs, education, and protection. That’s where we can bring an end to police brutality. We need more of us there.” And while Brooke explained that he’d experienced bigotry, hatred, and corruption in America, “Most Americans are good, decent, hard-working people, compassionate and concerned, and we need to reach out to them, not alienate them.” As for black power, Brooke asked, “What is power but the ability to change the basic conditions of life? Protests should aim to persuade, not paralyze. Intemperance and intolerance serve no one, and hatred guarantees failure. It seems to me that black power is really self-defeating.”

Brooke’s message has aged better than H. Rap Brown’s, who fulfilled his infamous quote that “violence is as American as apple pie” by shooting two sheriff’s deputies in Georgia and is now serving a sentence of life in prison. But Brooke was out of step with the New Left and its notion of radical chic.

At the 1969 commencement address at Wellesley College, Brooke expressed empathy with widespread campus protests but argued that the more radical expressions were “morally unsupportable” as well as “politically ineffective.”

His message grated on a young graduate named Hillary Rodham, who had previously volunteered for Brooke’s Senate campaign. She strode to the podium and responded to his remarks, saying, “We feel that for too long our leaders have used politics as the art of making what appears to be impossible, possible. … We’re not interested in social reconstruction, it’s human reconstruction.” Hillary’s speech helped land her in LIFE Magazine, but there’s no recent record of what side of the debate the once and probably future presidential candidate might now take.

Brooke’s Senate career continued to roll along eventfully as he established himself as very much at ease in the corridors of power and in D.C. social circles alike. He was re-elected by a 64 percent to 32 percent margin, and formed the core of an informal centrist coalition that met for lunch on Wednesdays to talk policy and often voted as a bloc. Talk of his replacing Spiro Agnew on the Nixon 1972 ticket (“a president who goes to Peking and Moscow could go to Brooke” opined one unnamed advisor) could have ended up with Brooke becoming our first black president in 1974. But the reality of Brooke’s political career ended in the embers of a messy divorce and subsequent defeat at the hands of Democrat Paul Tsongas in 1978.

After his years in the Senate, Brooke should have been a natural asset to the diversity-deficient Reagan and George H. W. Bush administrations, but he was never called back into public service. He sometimes surmised that it was because he was too outspokenly identified with the diminished liberal wing of the party.

But the real mystery and injustice came from Brooke being essentially written out of the history of the civil rights movement. For all the voluminous study of tributaries of the movement and occasional lionization of Black Panther militants, the simple profound fact of the first African-American Senator was somehow deemed unworthy of wide celebration, perhaps because he was a Republican and didn’t fit the script. My chapter-length profile of him in my first book, Independent Nation, was apparently the first thing written about him in quite a while. For years, Brooke even had trouble finding a publisher for his memoir, which was ultimately accepted by Rutgers University Press. He deserved better.

But while his public profile receded, his private life blossomed. He very happily remarried and referred to his wife Anne as “the best decision I ever made in my life,” and eventually moved to Miami. He was gratified to receive the Medal of Freedom from President George W. Bush and delighted in the election of President Obama (“as if he were my son”) though he never left the Republican Party, explaining to me that you don’t leave the church just because you don’t like the preacher.

In recent years, Brooke suffered through bouts of ill health, including a rare incidence of male breast cancer, which he uncharacteristically sought to publicize to raise awareness and reduce its stigma. But he was always uncommonly gracious, a truly gentle man, willing to dispense wisdom and perspective when asked.

In the end, the fight to form a more perfect union that Ed Brooke represented and advocated for is coming to fruition, however fitfully. To use just one measure, when Ed Brooke was first elected, less than 1 percent of American marriages were inter-racial—and one of those marriages produced our current president, himself a successor to Ed Brooke’s legacy in the Senate. Today, 15 percent of marriages are inter-racial and diversity in our elected officials is considered more of an asset than an obstacle. History also shows that Ed Brooke won the debate about whether reformers are more effective than radicals at achieving durable change in a democracy. Whether he gets his full due in popular culture remains to be seen.


This entry was posted in Columns, Featured Columns and tagged The Daily Beast. Bookmark the permalink.