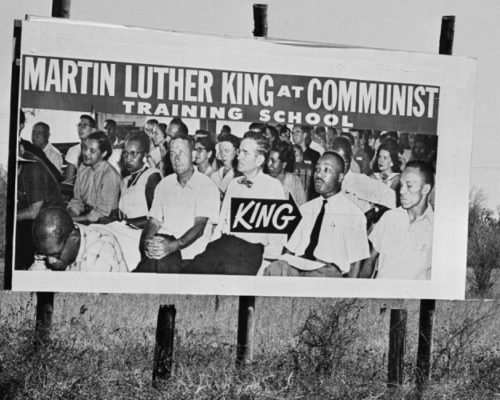 As he is rightly honored every year, it’s easy to forget that Dr. King was once reviled as a Communist and a threat to America. John Avlon on why the old attacks are a warning for today’s politicians.

This Martin Luther King, Jr. Day finds our nation rightly united in honoring the man who challenged America to live up to the promise that all men are created equal.

But it’s also worth remembering that it was not always this way. King was widely reviled in his lifetime, attacked as a troublemaker, a liar, a con man and a communist.

These smears are part of his legacy as well. They remind us that even American icons were once demonized and derided. And when we whitewash history into simplicity, we lose a sense of the real struggle that can inspire endurance today.

That’s why I can’t help but smile when I hear some of the figures honoring Dr. King today.

For example, at a recent presidential debate, Ron Paul answered questions about racist statements that appeared in newsletters published under his name in the 1990s by saying, “One of my heroes is Martin Luther King because he practiced the libertarian principle of peaceful resistance and peaceful civil disobedience.”

I have no doubt that Ron Paul is sincere, but I’d really like to see some supportive statements about Dr. King from Paul during the Civil Rights era.

Likewise, I was struck at Glenn Beck’s rally on the Washington Mall when he paid tribute to Dr. King, also part of a repeated riff on his show, which featured King’s face in a parade of heroes beginning with George Washington.

Last year, in the wake of Gabrielle Giffords’ shooting, Beck’s website offered a more explicit comparison, surreally positioning himself as the inheritor of King’s commitment to non-violence: “Over four decades ago, Martin Luther King, Jr. led the Civil Rights Movement with a philosophy and pledge of nonviolence. In the wake of the tragedy in Arizona, Glenn put forth a similar call for nonviolence.” You just can’t make this stuff up.

On the one hand, its satisfying to see a figure like Dr. King be mainstreamed and admired across the political spectrum—it is a sure sign of progress and societal evolution.

But there is no small amount of irony in conservative populists invoking Martin Luther King—because some of their ideological ancestors were among his most vicious critics.

For example, FBI Director J. Edgar Hoover, beloved by crew-cutted conservatives of his time, called King “the most notorious liar in the country”.

Polite society rallied against King under the auspices of the White Citizens Councils, appearing most recently as part of the plot line in the 2011 movie The Help.

Contemporary newspapers were likewise far from unified in their support of King, with the St. Louis Globe-Democrat calling King “one of the most menacing men in America today.”
There were roadside billboards scattered throughout the South purporting to show King at a communist training camp.

Adding to this narrative were people like Alabama Governor George Wallace, who told The New York Times in 1963 that “President [Kennedy] wants us to surrender this state to Martin Luther King and his group of pro-Communists who have instituted these demonstrations.”

But even an avowed segregationist like Wallace indignantly denied that he was racist, saying, “I never made a statement in my political career that reflects on a man’s race…My only interest is in the restoration of local government.” State’s rights were the rationale, defense of the Constitution the ennobling ideal.

When South Carolina Senator Strom Thurmond voted against the Voting Rights Act, he fretted that the Senate that day marked the “final resting place of the Constitution and the rule of the law, for it is here that we will have been buried with shovels of emotion under piles of expediency in the year of our Lord, 1965.”

This was the same type of rhetoric Senator James Eastland used to decry the Brown vs. Board of Education decision to his constituents in Mississippi: “On May 17, 1954, the Constitution of the United States was destroyed because of the Supreme Court’s decision. You are not obliged to obey decisions of any court which are plainly fraudulent and based on sociological considerations.”

It’s important to note that Dr. King’s most vicious critics were not Republicans. But they were conservatives—conservative populist southern Democrats, to be exact.

Just 50 years ago, the fault lines of American politics were still influenced by the battles of the Civil War. The South voted straight Democrat from 1860 to 1960 because the Republican Party was the Party of Lincoln. That historic legacy also helps explain why Martin Luther King, Sr., was a Republican. And Mitt Romney’s father George marched with MLK in Michigan, a sign of significant political courage at the time.

The partisan labels only distract from the deeper continuity—conservative populists using the politics of fear and hatred of the “other” to hold onto power. It results in an insidious form of group-think that attacks anyone who threatens orthodoxy. And too often it is wrapped up in lofty rhetoric about commitment to the Bible and the Constitution, while opponents are cast as secular socialists or worse.

The point is not that conservative populists today are racist—that is an ugly charge that gets thrown around too reflexively from the left in our politics.

But when we hear attacks once directed at Dr. King echoing in our politics today—calling opponents anti-American, communist or hell-bent on destroying the Constitution—it is worth caution and condemnation. They are likely to sound just as unhinged when historic perspective sets in.

The legacy of Dr. Martin Luther King belongs to us all—and we remember his true heroism by also remembering how powerful his critics were at the time. They tried to turn his dream into a nightmare. We shouldn’t simply accept Dr. King’s success without honoring his struggle—remembering those who stood with him while others screamed. Learning from history is, after all, the surest way to form a more perfect union.