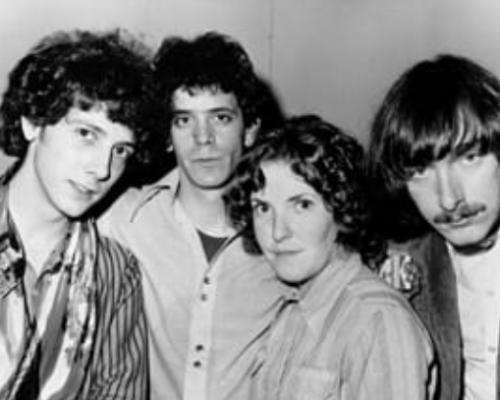 A few weeks ago, the British music press freaked out when they found a clip of one ‘Maureen Tucker’ being interviewed at a Tea Party rally in Georgia. Could this be the same Moe Tucker who played drums alongside Lou Reed and John Cale in the legendary 1960s rock band the Velvet Underground? Was the backbeat behind ‘All Tomorrow’s Parties’ now railing against the Democratic Party with a bunch of Okie from Muskogees?

The answer was yes. It’s the story of unexpected political evolution with a generational twist – an icon of alternative rock turns into a conservative populist, a tale for our times.

The notoriously understated Moe Tucker now lives in a small Georgia town about hour outside Atlanta, though her New York accent endures. She’s a suburban warrior, the woman next door with grown up kids and a rock n’ roll past. She was at first reluctant to talk when I hunted down her number. But her journey might help humanize the Tea Party for members of Alternative Nation – or it might just add insult to the injury that looks like its coming on Election Day.

“My vote this year is going to be against Obama.” she told me over the phone. “His attitude. His dismissiveness. I don’t like it. And it isn’t just him, it’s Congress, the whole damn bunch of them.”

But it wasn’t always this way: “When Obama was mentioned as a probable nominee I thought ‘wow, what a great step for America.’ And then I thought, ‘well, I’m gonna find out about this guy.’ So I started watching the news and hearing what he had to say. And the more he talked, the more I thought ‘Okay, who’s gonna pay for this? How is this gonna be paid for? This is insane. This is nuts. This is crazy.’ So I voted for McCain.”

It was the first time she’d ever voted Republican.

Then came Tax Day of April 2009. “There were Tea Parties that day all over the country and this one was 45 minutes from my house. So I thought, ‘all right, I’m gonna go.’…It was about 200 people in a small town in Georgia. I just had my flag and my sign and I wanted to be counted.”

When it was verified that the Maureen Tucker caught in a local news interview was the one and same, the British Rock blogs held a combination of a wake and a burning at the stake. The comments from readers particularly stung: “I read the comments and to see people be so hateful, so presumptive. A few assholes, excuse me, saying things like, ‘She must be on drugs.’ I mean, anybody who knows anything about me knows that I never took any drugs.”

Back in her days with the Velvets, “We never talked about politics. (John) Cale was always reading three newspapers and knew what was going on but the rest of us didn’t bother.” But she’s always considered herself a Democrat, “ because I thought ‘Democrats are for the people; and Republicans are for the rich people.’” And its not like she was a Bush fan before. “I remember complaining about Bush in ‘04 telling my sister if he wins again I’m moving to Scotland. I don’t remember what I was so angry about. He seems like an honorable man.”

The fact Maureen Tucker’s comments sound so familiar to any one with friends or family who identify with the Tea Party says a lot about the roots of their anger. It’s not just the 60s crew-cut crowd of traditionalists – there’s something bigger going on, rooted in frustration with self-dealing politicians and their unsustainable spending.

“I don’t agree with everything people in the Tea Party say,” Moe remarks. “I’m not in love with anybody now, that’s for damn sure. There is no one at the moment, man or woman, who I hear and I think ‘that’s a good person.’ I’ve often thought that a lot of these politicians must have taken ‘How Not to Answer a Question 101’ in college. You’d think that some of these TV commentators, after a few years, would want to leap across the table and punch someone.”

She recounted with special frustration watching a recent Fox News interview where Chris Wallace asked GOP Senate nominee Carly Fiorina what specifically she would cut to balance the budget. “She refused to answer the question seven times and then accused him of asking a purely political question,” she said.

“My anger now is anti-politician and it always has been – they’re all liars and cheats. And that sucks,” Moe says. “The final words in my article should be ‘term limits.’”


This entry was posted in Columns, Featured Columns and tagged Independent Voters, The Daily Beast. Bookmark the permalink.