Poliwood: The Ups and Downs of Combining Celebrities and Politics – CNN 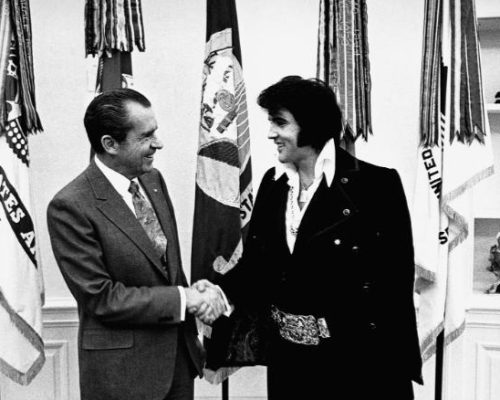 Poliwood — the intersection of politics and Hollywood — can be a powerful combination, capable of elevating policy debates and inspiring broad audiences. Unfortunately, it can also dumb us down to a nation of slack-jawed spectators.

This past week, we saw two celebrities step into the political arena on opposite sides of the partisan divide, with very different results.

On Sunday night, Taylor Swift told her million-plus Instagram followers to register to vote while endorsing the Democratic candidate for Senate in her native Tennessee, Phil Bredesen, a popular former Governor and Nashville Mayor. According to the director of communications for Vote.org, an estimated 65,000 people registered to vote within 24 hours.

On Thursday, Kanye West entered the Oval Office for a meeting with President Trump, surrounded by a phalanx of reporters. Wearing a MAGA hat, the rapper delivered an enthusiastic if rambling monologue feet from the Resolute desk.

In rough chronological order, Kanye called for prison reform, pitched hard for Adidas, called for abolishing the 13th amendment (which ended slavery), talked about living in the moment and his now-revoked diagnosis of bipolar disorder, proposed replacing Air Force One with a hydrogen plane, took a contrarian view on police violence, slammed liberals for their obsession with racism, supported inner-city manufacturing, endorsed teaching math and basketball at the same time to combat ADD, and mused about running for president himself, but only after Trump is finished.

If Kanye’s comments had been coherent, they would have made great copy. Instead, it was a surreal and sad spectacle — one of the world’s biggest celebrities on an ego bender at best and on the edge of a breakdown at worst.

But Trump seemed to eat up every odd moment. After all, Kayne is the probably most prominent African-American to endorse his presidency since Omarosa left the White House.

Poliwood can make strange bedfellows. Conservatives embrace a rapper while liberals rally around a one-time country music star. And the Kanye-Trump meeting is just the latest example of how celebrities have been used for good and ill by presidents on both sides of the aisle.

One hundred years ago, the first truly national celebrities from the silent movie era — Charlie Chaplin, Mary Pickford and Douglas Fairbanks — were dispatched on a national tour to sell war bonds on behalf of the Wilson administration during World War I. (For those of you tempted to Google “war bonds,” I’ll save you a click: it’s how we used to pay for wars before we passed the buck to the next generation).

Franklin Delano Roosevelt learned how to harness the power of someone else’s celebrity in the age of radio and summoned two of the biggest stars of the time — Frank Sinatra and Orson Welles — to perform at political rallies carried over the airwaves. The multifaceted genius of Welles even found time to praise Roosevelt in syndicated newspaper columns and serve as a ghostwriter for his campaign.

Years later the young and telegenic Senator John F. Kennedy drew on pop culture for his campaign, commissioning Sinatra to sing “High Hopes” during the 1960 election. But while JFK’s celebrity friends added to the glamorous aura of Camelot, they were rarely deployed for policy purposes. Kennedy was more focused on the personal benefits that came from hanging out with Marilyn Monroe.

Richard Nixon tried to flip the script for Republicans. He was brilliant but awkward; cold rather than cool. But he agreed to appear on the popular comedy variety show “Rowan and Martin’s Laugh-In” to help cut the ice, gamely repeating the show’s catch phrase “Sock it to me!” He knew that while long-haired, baby-boom celebrities were protesting, he could count on older, establishment figures like Jackie Gleason, Bob Hope and Sammy Davis Jr. to back him.

Then there was the time that Nixon met the King. Elvis Presley wore a purple velvet suit, a massive gold belt and a handgun to the Oval office. He asked to receive, without evident irony, a badge from the Bureau of Narcotics and Dangerous Drugs. It has been, as of 2015, the most requested photo from the National Archives.

President Jimmy Carter’s rise was aided by early positive profiles by Gonzo journalist Hunter S. Thompson and the evangelical candidate’s surprising admiration for Bob Dylan and the Allman Brothers. Willie Nelson even famously smoked a joint on the roof of the White House after playing a concert for Carter.

But the big daddy of celebrity politics was Ronald Reagan. For all the right-wing fundraising off stereotypes about liberal Hollywood’s hostile takeover of our politics, the only denizen of Hollywood who actually reached the Oval Office was Reagan. His White House attracted old celebrity friends, ranging from Sinatra (again) to Jimmy Stewart. First lady Nancy Reagan even publicized her “Just Say No” to drugs campaign with Mr. T.

And in Reagan’s wake a host of celebrities ran for office as Republicans, from California Governor Arnold Schwarzenegger to Tennessee Senator Fred Thompson to congressman Sonny Bono.

More recently, President George W. Bush developed a lasting friendship with U2 frontman Bono, who played a pivotal role lobbying Congress for the international AIDS drug program known as Pep-Far. It’s often cited as one of that administration’s proudest legacies, saving millions of lives. And President Barack Obama was criticized by Fox News’ Sean Hannity for hobnobbing with Jay-Z.

At its best, Poliwood makes it cool to care, leveraging celebrity to galvanize support for something more important than celebrity. As George Clooney said during his work to bring international attention to the genocide in Darfur and the need to end decades of civil war in South Sudan, “Celebrity can help focus news media where they have abdicated their responsibility. We can’t make policy, but we can ‘encourage’ politicians more than ever before.”

But at its worst, Poliwood can help politicians deflect attention from their own unpopular policies, dumbing down the electorate in the process.

In some ways, President Trump represents the culmination of Poliwood to date. After multiple corporate bankruptcies, the publicity-loving real estate mogul reinvented himself as a reality TV star with “The Apprentice.” In the process, he solidified his place in the American imagination as a decisive executive, eager to say “you’re fired” at the end of every show.

Trump earned a star on the Hollywood Walk of Fame and reoriented his business around marketing. He then parlayed his no-nonsense, politically incorrect profile into a successful pitch for the presidency.

But the rush to emulate Trump’s cannonball into the political pool has its limits. “Sex and the City” star Cynthia Nixon was trounced in her energetic attempt to run to the left of New York Governor Andrew Cuomo in the Democratic primary last month.

Whether Poliwood is a force for good or simply a glittering distraction depends on this question: What’s actually accomplished?

If a celebrity endorsement just benefits a politician looking to boost their profile and prove their cool, then it’s a lame effort to manipulate fans with short attention spans.

But if Poliwood draws sustained attention to a real public policy problem, it can serve as a gateway to civic engagement and spur political action.

By that standard, Taylor Swift’s Instagram call to arms ended up having a measurable impact by encouraging voter registration. But the Kayne-Trump summit was a lost opportunity — an attention bath for two boundless egos rather than a serious attempt to raise awareness about prison reform.

The comic-book-loving Kanye and his Presidential pal would do well do recall this bit of advice from Spiderman: With great power comes great responsibility.