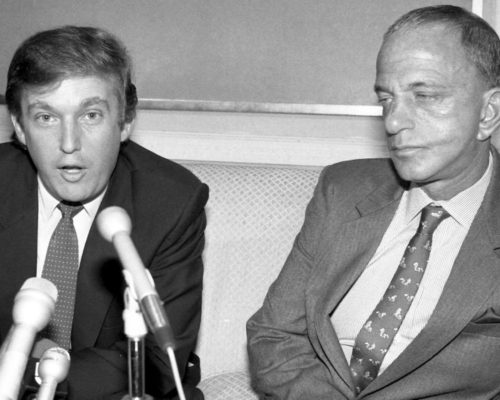 “Study the late Joseph McCarthy, because we are now in period with Mueller and his gang that make Joseph McCarthy look like a baby!” President Donald Trump tweeted from the final days of his golfing vacation at Bedminster, New Jersey. “Rigged Witch Hunt!”

We’ve seen plenty of Trump critics — most recently Admiral William McRaven — call out what they see as the President’s “McCarthy-era tactics.” But in a classic Trump deflect-and-project move, the President is now comparing the tight-lipped Republican leading the special counsel investigation — Robert Mueller — to the unhinged demagogue from Wisconsin.

Lord knows we could use some more civic education in our country, and so I’m delighted that the President has suggested we study the McCarthy era more closely. But the parallel won’t work the way he intends.

As it turns out, McCarthy and Trump shared an infamous aide, a widely reviled but nonetheless influential lawyer named Roy Cohn. In Jon Meacham’s excellent new book, “The Soul of America,” he recounts McCarthy’s advice to Cohn before one of their contentious televised hearings: “‘People aren’t going to remember the things we say on the issues here, our logic, our common sense, our facts,’ McCarthy told Cohn. ‘They’re only going to remember the impressions.'”

This is a demagogue’s calling card — a disregard for facts in favor of fear-fueled, emotional impressions, which are deployed to divide and then to conquer. And Cohn had a fascinating personal impression of McCarthy, seeing him as essentially a salesman, for whom accuracy was an obstacle to attention.

“He was impatient, overly aggressive, overly dramatic. He acted on impulse. He tended to sensationalize the evidence he had — in order to draw attention to the rock-bottom seriousness of the situation. He would neglect to do important homework and consequently would, on occasion, make challengeable statements… He knew that he could never hope to convince anybody by delivering a dry, general-accounting-office type of presentation. In consequence, he stepped up circumstances a notch or two,” Cohn recalled in a memoir about McCarthy.

Sound familiar? That innocuous “notch or two” is another way of explaining what Trump has described as “truthful hyperbole.” But there are far higher stakes for our republic when the goal is something greater than a real estate sale.

McCarthy’s rise — and the way he played the media to achieve it — is also more relevant to our times than one might expect from reading history books. In a fascinating decades-old book called “Joe McCarthy and the Press,” Edwin R. Bayley recounted the way the Wisconsin Senator courted the press while attacking it.

“No other American politician in recent history has made such a determined campaign against the press, not even Richard Nixon, whose loathing of the press is well known,” Bayley wrote in 1981. “Yet many of the reporters who covered McCarthy compare him favorably to Nixon. They speak of his humor, his mischievous quality, his friendliness; they share, to a degree, his cynicism. They deplore his issue, his methods, and his insensitivity to his victims, but they also see him as an adventurer, an outlaw, a lone wolf who chose disgrace rather than compromise. It was deadly serious, but it was a game for McCarthy, and he enjoyed playing it; so did the reporters. They wanted to show him up as a fraud; he just wanted his name in the papers.”

This echoes the way some reporters and commentators greeted the rise of Trump in 2016. The man is not without rogue-ish charm. His outrageous claims made great copy, and there was no denying that his often reality-challenged red meat riffs resonated with his right-wing populist base.

But McCarthy never made it close to the Oval Office.

The tipping point for McCarthy began when a handful of centrist Republican senators — led by Maine’s Margaret Chase Smith — stood up to the bully by denouncing him from the floor of the Senate. In a legendary speech known as “The Declaration of Conscience,” Smith said: “Those of us who shout the loudest about Americanism in making character assassinations are all too frequently those who, by our own words and acts, ignore some of the basic principles of Americanism: The right to criticize; The right to hold unpopular beliefs; The right to protest; The right of independent thought…I do not want to see the Republican Party ride to political victory on the Four Horsemen of Calumny — Fear, Ignorance, Bigotry, and Smear.”

This was a powerful opening shot, but the fight against McCarthy’s fear-based appeals was far from successful at the outset. It would take high-profile tangles with broadcast journalist Edward R. Murrow — dramatized in the film Good Night and Good Luck — and a withering pushback from a lawyer named Joseph Welch, who denounced McCarthy’s attack on a young lawyer by famously asking, “Have you no sense of decency, sir, at long last? Have you left no sense of decency?”

Decency is a quality in short supply in our politics today. Expediency and outrage are instead our competing virtues, with too many elected Republicans afraid to stand up to Trump when they know he is wrong — lest they alienate the Republican base.

Trump is presumably looking for his own Welch moment when he tweets, “So many lives have been ruined over nothing – McCarthyism at its WORST!” in reference to the Mueller investigation. Perhaps never has a self-styled strong man so enjoyed playing the victim card.
But as we work our way out of this civic stress test, there are useful lessons to be taken from the McCarthy era for citizens and journalists alike.

McCarthy was determined to convince citizens that the press was the enemy of the people — though that term was more associated with Stalin and the Soviet Union at the time. For example, McCarthy said that subscribers to the Milwaukee Journal Review were “contributing to bringing the Communist Party line into the homes of Wisconsin,” with the specific aim of not having people believe that they could trust critical news in the press.

For a time, reporters covering McCarthy felt caught in a trap, as Meachem recounts in his book. “My own impression was that Joe was a demagogue,” one journalist complained. “But what could I do? I had to report—quote—McCarthy. How do you say in the middle of your story, ‘This is a lie’? The press is supposedly neutral. You write what the man says.”

But some courageous journalists argued that pursuit of the truth was an even higher virtue than strict objectivity. The Denver Post’s publisher and editor-in-chief Palmer Hoyt believed that “there is nothing wrong with this country that repeated strong dosages of the facts will not correct.” The crusading television news pioneer Ed Murrow made the case in words that still resonate across our republic: “Dissent is not disloyalty. We will not be driven by fear into an age of unreason.”