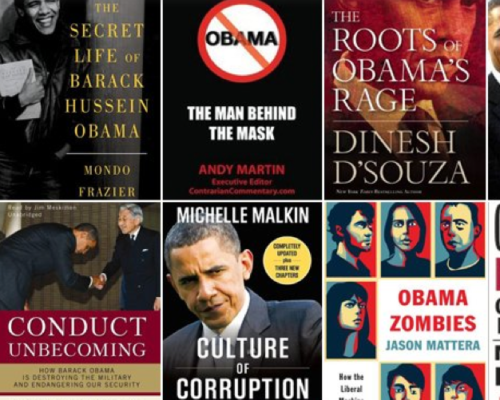 Welcome to the Obama Haters Book Club—a parallel universe of fear mongering for fun and profit.

Over the past four years, no less than 89 obsessively anti-Obama books have been published, as now catalogued by The Daily Beast. I’m not talking about cool statements of policy difference, but overheated and often unhinged screeds painting a picture of the president as a dangerous radical hell-bent on undermining the Republic by any means necessary. It is hate and hyper-partisan paranoia masquerading as high-minded patriotism.

Here’s the worst part—this steady drumbeat of incitement is having an impact on this presidential election because it has poisoned the well of civic discourse for many voters and those in their radius of damage. It has helped divide the nation beyond reason, distorting the president’s real record beyond all recognition.

By their very nature, books offer the promise of education and enlightenment. These conspiracy entrepreneurs prey on the prejudices of their audience. This is high-priced hardcover bile, boasting titles like:

The Communist; The Muslim Brotherhood in the Obama Administration; Where’s the Birth Certificate?; The Manchurian President: Barack Obama’s Ties to Communists, Socialists and other Anti-American Extremists; The Great Destroyer: Barack Obama’s War on the Republic; Trickle Down Tyranny: Crushing Obama’s Dream of the Social States of America; Gangster Government: Barack Obama and the New Washington Thugocracy; How Obama Embraces Islam’s Sharia Agenda; The Post-American Presidency: The Obama Administration’s War on America; To Save America: Stopping Obama’s Secular Socialist Machine; The Blueprint: Obama’s Plan to Subvert the Constitution and Build an Imperial Presidency; and what is still my personal favorite title: Whiny Little Bitch: The Excuse Filled Presidency of Barack Obama.

The titles themselves suggest palpable weirdness and un-wellness, a departure from reality commensurate with joining a cult. But the authors are not all fringe figures nervously typing up pamphlets in their basement. They include former elected officials, administration appointees, and at least one presidential candidate among with the parade of professional polarizers and right-wing shock jocks. You can check out our interactive gallery to figure out who is who, with their books helpfully divided into subject areas: Economy, Security, Media, HealthCare and, by far the most popular, Dangerous Radical.

They’ve been able to spread their message and make a lot of money in the process by hitting the hyper-partisan circuit with high-profile help. A stunning 56 of the authors in the Obama Haters Book Club have been featured on Fox News according to Lexis-Nexis searches, giving them valuable mass media exposure, the opportunity to preach to the conservative choir and sell books by the boatload.

As a result, the cottage industry of hating Barack Obama is now big business. Hack-ish screeds like The Amateur by Edward Klein outsell well-written and thoroughly reported books like Barack Obama: The Story by David Maraniss. Hate sells because it is simple.

Of course, President Obama isn’t the first White House occupant to face unhinged hatred and conspiracy theories. It is in part a tradition going back to our earliest days, consistent with the First Amendment. But because of the pervasive nature of partisan media in the modern world, the problem has gotten demonstrably worse.

Two years ago, when I put together the first Obama Haters Book Club list, the number of titles was at 46, roughly half the current total.

Compare that to the literature of Bush Derangement Syndrome, which totaled just 5 at the midterm elections of 2002 and rocketed up to 46 by November of 2004. Obama Derangement Syndrome shares some of the same qualities—truthers and birthers are in some respects mirror images of each other; obsessed with their targets alleged tyrannical ambitions and core illegitimacy—but they are not remotely equivalent.

There have been twice as many Obama Derangement Syndrome books as specimens of Bush Derangement Syndrome. The cycle of incitement has gotten worse and more widespread because it’s been semi-legitimized. Some of the same folks who called BDS treasonous see ODS as part of a patriotic resistance. This is more insidious than simple hypocrisy.

Barack Obama is the first Democratic president who has truly had to contend with the full spectrum of partisan media machinery. Hating Bill Clinton was an essentially analog event. Talk Radio was in its full glory, but Fox News was still in its infancy as was the Internet. So stories about Bubba’s alleged propensity for Marxism, murder, and drug-dealing never really got beyond John Birch Society and Moral Majority mailing lists. And now Bill Clinton seems to be, hilariously, every Republicans’ favorite living Democrat.

The core problem with Clinton for many conservatives seemed to be that they could not accept him as a legitimate president until he was out of office. The same is now true with Barack Obama but on steroids, with the added alloy of race inserted into the mix.

We will look back on birtherism and some of the other strange conspiracy theories that have clustered around him as, at the very least, vestigial remnants of racism. The sheer tonnage of hate and lies directed his way in the White House is stunning and it will seem somewhere between stupid, silly, and sad in the future.

But for now, we are witnessing the harvest of that hate. Talk to otherwise decent, well-intentioned citizens on the campaign trail and these themes keep creeping up in conversation: “Obama is a socialist” and “He wants to make us more like Europe” are among the most benign; “Muslim” and “Marxist” are not uncommon. This past Wednesday, I spoke with three tipsy middle-aged women who helped put on an Ann Romney rally in wealthy Winter Park, Florida, who did not hesitate to repeatedly describe the president of the United States as “evil.” Members of Congress even repeat lines straight out the Obama Haters Book Club, talking about Obama’s “Gangster Government,” “Thugocracy,” Muslim Brotherhood infiltration of his administration, his Communist influences and tyrannical ambitions. One Romney campaign ad even spoke of the president’s “War on Religion.”

This doesn’t even qualify as dog-whistle politics—it directly repeats the core drumbeat of the Obama Haters Book Club: that President Obama is un-American and anti-American.

As a result of this constant drumbeat, many Americans have a hard-time recognizing President Obama’s record for what it objectively is.

So a president who has presided over a doubling of the stock market is somehow seen as socialist and anti-business. A president who ordered the killing of Osama bin Laden and the systematic targeting of al Qaeda leadership while keeping America safe from subsequent terrorist plots is a secret Islamist-sympathizer.

Most significantly, a legislative record that led non-partisan political scientists at the respected blog VoteView to say “President Obama is the most moderate Democratic president since the end of World War II” is instead widely seen as a far-left radical. It is a lie told enough times that some people are convinced it must be the truth.

The most pervasive and troubling aspect of this election is the gap between narrative and fact. It is a direct result of the interplay between hate and the rise of hyper-partisan media. And it will have long-term repercussions after this election has passed. As I wrote two years ago in the first “Obama Haters Book Club” column, “We’re getting caught up in the politics of incitement, becoming desensitized in ways that damage the institutions of our democracy. Because if any Republican thinks that this cycle will stop with the next president, they underestimate the ways that politics follows the lines of physics—every action creates an equal and opposite reaction. This will become the new normal…We need to stop this cycle of incitement before it destroys our ability to unite as a nation absent a disaster.”

Healing after this election will take a long time—thanks in large part to the Obama Haters Book Club.