American Way: What We Didn’t Learn After Newtown – The Telegraph 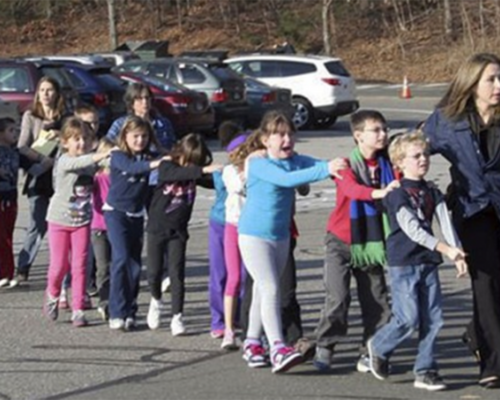 Here’s the thing about shock. It fades. Certainly not for the families of the 20 children who were gunned down at Sandy Hook Elementary School one year ago. But for the rest of us, who recoiled in horror at the evil enabled by semi-automatic weapons wielded by a monster of a young man, the shock fades.

The urgency over trying to ensure that such a slaughter “never happens again” – it fades. The calls for new legislation, reasonable restrictions which might make it just a little bit more difficult to kill as many people as fast as possible, grow stale and over time start to seem impractical and implausible. And so conventional wisdom congeals more or less where it was before the massacre.

And guess what? That was the obstruction strategy all along – a smart but cynical bet on civic amnesia, pushed by lobbyists who cajoled congressmen and advised them to resist the wishes of 90% of the American people.

Reality Check: 90% of Americans rarely agree on anything. We’re diverse that way.

But earlier this year, the respected Quinnipiac poll found that 91% of Americans supported universal background checks for commercial firearm purchases – including 88% of gun-owning families. Hell, a poll commissioned by Mayors Against Illegal Guns conducted by conservative pollster Frank Luntz found that 74% of NRA members supported background checks on every gun sale. But when a bipartisan bill to achieve that end came up in congress, it couldn’t get enough votes to pass.

The bill was crafted by Republican Senator Pat Toomey of Pennsylvania and Democratic Senator Joe Manchin of West Virginia and was designed to ensure that all commercial firearm sales would commence with a background check, looking for signs of mental illness or a criminal record. Sounds like relatively non-controversial common sense. So why did it fail? Well, here’s Senator Pat Toomey’s explanation: “There were some on my side who did not want to be seen helping the president do something he wanted to get done, just because the president wanted to do it.”

Got that? Poisonous polarization doomed even a modest bipartisan attempt to take action after the Sandy Hook slaughter. More ambitious proposals – such as reinstating the assault weapons ban which had been in place for a decade before, or banning the sale of high capacity ammunition clips – were declared dead on arrival in Washington DC. There was outrage initially, calls to kick the 41 Republicans and 5 Democratic Senators who blocked the measure out of office. The gun advocates are tireless and they bet on suburban swing voters forgetting about their anger.

In the meantime, gun advocates set about targeting state legislators who voted for new gun laws. In Colorado, the site of 2012’s mass shooting at a midnight showing of ‘Batman’, two Democratic State Senators lost their seats in a recall election that drew massive outside spending, including from New York City Mayor Michael Bloomberg. The result of the low-turnout election was read as a decisive defeat in Washington DC, and soon the message spread that gun laws were too politically risky to pursue. Much pearl-clutching ensued.

Guns are part of our culture in the United States, a legacy of the frontier culture that emphasized the need for individual self-defense. I know that’s hard to appreciate from across the pond. But here’s what’s undeniably ugly: we see the death toll from a Newtown shooting every week, just spread out among different jurisdictions.

There are 11,000 Americans killed by gun violence every year, excluding suicides. And since the Sandy Hook slaughter, there have been at least 16 mass shootings in the USA – from whole families gunned down to 5 people killed in an attack on a community college in Santa Monica to 12 people murdered at the Washington Navy Yard in September. And upon hearing of each mass murder the familiar receptors kick in, feelings of outrage intermingled with déjà vu.

As the horrors pile up, they begin to blur. Young men with mental illness are a common denominator but so, inescapably, are guns. The NRA is fond of saying that guns don’t kill people, people kill people. But the guns help.

Of course, you can’t legislate away crazy. Mental illness is and always will be with us. An even bigger fool’s errand would be to pretend that we can create a utopia on here on earth and eradicate evil. It exists. And its evil predates violent video games by thousands of years.

But if you believe that government exists to secure a framework within which people are free to live their lives to the best of their ability (as I do) then out-of-control guns are not an inconvenient abstraction. They are a matter of life and death.

Here’s what’s heartening. There is more common ground among people than the two parties. A brand new poll found that a majority of Republican men still favored universal background checks. And when Virginia Democrat Terry McAuliffe was running for governor he did not shimmy when confronted with his “F” rating from the NRA. Instead, during a televised debate, he embraced it. “I don’t care what grade I got from the NRA,” McAuliffe countered. “I never want to see another Newtown or Aurora or Virginia Tech ever again.”

That statement might have been seen as political suicide in the past, but in today’s swing state Virginia suburban swing voters nodded their heads. Bumper-sticker absolutism about the Second Amendment doesn’t sound like common sense anymore. Instead, there might have been remembrance of how Ronald Reagan supported background checks and how the assault weapons ban was once supported by political leaders on both sides of the aisle.

One of the wages of polarization is the obscuring of what once was broad common ground even on supposed culture war issues. It is a reminder that while the two parties seem deeply divided, the vast majority of American people are not.

But the gutless wonders in Congress seem determined to own their record as the least productive and least popular congress on record. Profiles in Courage aren’t on the menu. Nonetheless, the accumulated costs of senseless mass shootings pile up, demanding our attention. With each horrific televised dispatch the muscle memory twitches. Our culture won’t change. But the room for rational questions just might. Why does driving a car require a license but owning a gun doesn’t. Why are all semi-automatic weapons automatically covered by the Second Amendment?

Partisan fear-mongering distorts too much of our politics. Real horror ought to inform our policy debates at least as much in the fullness of time. After all, we are always safer when we have the courage to confront reality.


This entry was posted in Columns, Featured Columns and tagged National Security, The Telegraph. Bookmark the permalink.