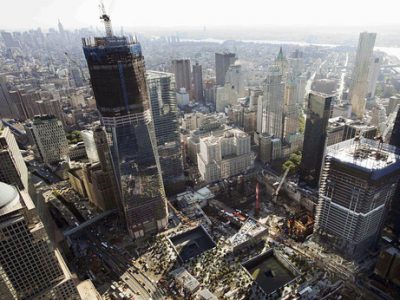 We swore that we would never forget. And for those still counting, today marks four and a half years and three days since the attacks of September 11, 2001.

Yesterday will be remembered as a minor milestone in our city’s process of grieving and healing for another reason. It was the day that construction formally began at ground zero – as a dozen workers contracted by the Bovis Construction firm quietly showed up to work in the pit at 6 a.m. to prepare the site for the foundation of the memorial and museum.

Outside the perimeter gates a dozen protesters had quietly stood vigil throughout the moonlit night beside the 10 & 10 Firehouse on Liberty Street. Led by the Reverend Bill Minson – former ICM talent agent turned Baptist minister – a collection of fallen firefighter family members milled by a makeshift memorial to their loved ones, passing coffee and comfort, urging passersby to sign their petition to stop the construction process next to a yellow sign which read, “No underground memorial. Don’t bury our memories.”

For some, the construction seemed to begin embarrassingly late. After all, The Empire State Building took just one year to construct. America fought and won World War II in as much time as it has taken to break ground on the construction on the Freedom Tower and adjacent Memorial at ground zero. But for others, the family members still seeking a closure that may never come, the process has felt rushed and corporate, with insufficient consultation.

“My son was killed on 9/11. I buried him on March 9, 2002. I was one of the lucky ones,” says Rosemary Cain, handing out a prayer card emblazoned with the image of her son, Firefighter George C. Cain. “It is not a normal situation.”

One of the unlucky ones to whom Mrs. Cain referred is Diane Horning of Union County, N.J., president of the WTC Families for Proper Burial, which supported a last-minute injunction seeking to stop the construction. Her son, Matthew – age 26 – was a civilian killed in the towers. His body, like so many others, was never recovered. His mother believes that his remains, turned into ash by the collapse and subsequent months-long underground fires, are still interred in the city’s garbage dump at the unfortunately named Fresh Kills, Staten Island.

“It never occurred to me that they would leave our children there,” says Ms. Horning. “I care about this memorial … But how significant is that to me if my son is in the garbage?”

With grief still raw, Ms. Horning is one of the leaders of the family’s group looking for a suitable final resting place for the ashen remains that are known as “The Fines,” so-called because, as members of the medical examiner’s office explained to her, “this is the finest of the siftings that came through.”

The sheer tonnage of The Fines – an estimated 1.2 million cubic yards – has become the source of a grotesque NIMBY battle, at odds with the intended tone of reverence that has accompanied much of the process. Diane and others affected had initially hoped for a burial mound, something “landscaped, serene, with a bell tower, and maybe a lovely gate,” at ground zero. But when the scale of the planned development became clear, “We had to swallow hard and say ‘OK’, but at least take them out of the garbage and take them to a more respectable location … We never even got a respectable response.”

There is currently a bill in the state Legislature calling for such a site to be found, but Community Board One, which represents lower Manhattan, unanimously passed a resolution last month “strongly” opposing “any effort to re-introduce any WTC debris that currently sits at the Fresh Kills Landfill, back to the WTC site or anywhere else.” It is now unclear where Assembly Speaker Sheldon Silver, whose district encompasses ground zero, will emerge on that issue. But one thing is clear – while lip-service and sentiment always favors the 9/11 families, those whose loved ones are believed to be among The Fines are running out of active allies as well as possible locations in the city.

“Far be it from me to understand the depth of the sorrow that the family members feel,” says World Trade Center Memorial Foundation President and CEO Gretchen Dykstra, “but I remember history and the pain and anguish that surrounded the Vietnam memorial – in fact, Maya Lin was on the memorial selection committee – and now it is considered the gold standard.”

The memorial design will include a tomb beneath the reflecting pool symbolizing the unidentified remains. Next to that, adjacent to what is being called “the contemplation room,” the city’s Medical Examiner will be maintaining a climate-controlled room containing all the existing unclaimed body parts – from fingers to torsos – will be numbered and separated in plastic packets. Designs call for a room exclusively for September 11 family members to view the repository, in the hopes that medical advances will allow for future identification. Whether this provides a new measure of comfort is more difficult to calculate. All the choices left in the aftermath of this attack are brutal.

And so, four and a half years later, the battles continue. They are mostly skirmishes now, between protesters and bureaucrats, and attract less attention. The temptation to want to forget the inconvenient if heartbreaking loose ends is understandable but insufficient. With some industriously focused on binding the still-open wound in our city’s sky-scape, others feel powerless in the process, and feel their still-unhealed scars are being ignored. The debate as to whether ground zero should be primarily a “soaring memorial” or a revived commercial site remains unresolved. For those left only with ashes, the passing of time only adds insult to injury.


This entry was posted in Columns and tagged 2008 Elections, The New York Sun. Bookmark the permalink.